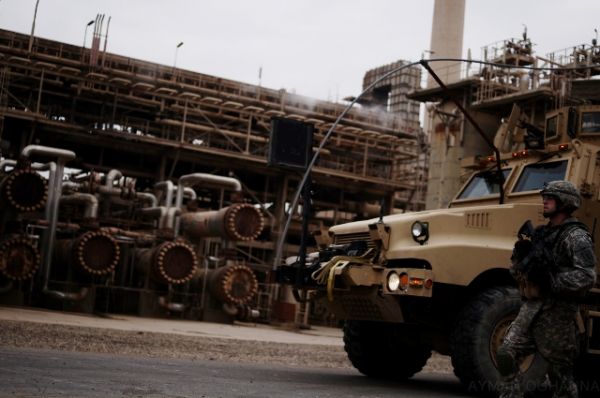 U.S. forces, on patrol in the Beiji refinery in 2010, will withdraw from the base at the refinery sometime this summer. (AYMAN OGHANA/Iraq Oil Report)
Ben Lando of Iraq Oil Report

BAGHDAD - After Osama bin Laden was killed, U.S. officials began poring over data that confirmed what is already common knowledge here in Iraq: al-Qaida's senior leadership is directing its cells to keep targeting the country's oil sector, according to the top U.S. military spokesperson in Iraq.

"We learned in the past couple of months that there are still current instructions out there, strategic-level guidance, if you will, from al-Qaida senior leadership to conduct these attacks," Maj. Gen. Jeffrey Buchanan said in an interview with Iraq Oil Report.

Al-Qaida and its various affiliates operating in Iraq have been less active since the height of post-invasion violence in 2006 and 2007, but they have nonetheless continued to sew violence and instability. In the past six months, Al-Qaida-affiliated groups have claimed responsibility for mass casualty sieges on provincial council buildings and have been blamed for bombing the country's largest oil refinery and taking it offline in February.

"One thing that was, that I think that we learned in the exploitation of some of the information that was taken when Osama bin Laden was killed, was the currency of some of the instructions, the strategic-level instructions back to terrorist groups – and we're talking (Islamic State of Iraq) and al-Qaida in Iraq – to attack, to continue to attack infrastructure," Buchanan said.

Buchanan said the intelligence shows that infrastructure as a whole is a main target of the terrorist network, which aims to destabilize the country by attacking key government buildings and personnel. He added that al-Qaida's leaders seemed especially eager to cripple the energy sector.

"I think it was specified oil infrastructure," Buchanan said. "It could be the energy sector. I'm not exactly sure how it was translated, whether it was electricity, oil, whatever."

Of all the attacks on the energy sector so far this year, the most dire has been the bombing of the Beiji refinery, in northern Iraq's Salahaddin province. In the early morning of Feb. 26, two men stole into the refinery, shot two workers, planted bombs on key units, and escaped amidst the explosions. Four people are set to go on trial, one in absentia, whom Interior Ministry officials say have connections in some way to the refinery.

"The attacks at Beiji were clearly linked to al-Qaida," Buchanan said.

Before a massive security effort began at the refinery three years ago smuggling operations fed fuel and money to al-Qaida, Buchanan said, characterizing the recent bombing attack as retaliation for the crackdown.

The trend of violence against the energy sector has continued since then. Earlier this month, saboteurs bombed the Zubair tank farm in Basra, an area where infrastructure has largely avoided targeting by al-Qaida over the past eight years.

Over the past 10 days, according to security officials, four bombs have been found in the Daura refinery, Iraq's second-largest, in central Baghdad. The interview with Buchanan was conducted before that revelation came to light.

Buchanan said al-Qaida had also sabotaged electrical infrastructure over the past six months. Those attacks, he said, "could also be explained by some of this higher-level guidance to attack infrastructure."

The revelations of al-Qaida's attempts to violently undermine the Iraqi state are not new, nor are attacks on Iraqi energy infrastructure. But they come as insurgents have stepped up mortar, rocket and roadside bomb attacks against the U.S. military, and as Iraqi and American officials negotiate an extension to the Status of Forces Agreement that currently expires at the end of this year.

Iraqi and American officials in favor of the extension point to the lack of readiness by Iraqi forces to combat both terrorist attacks and outside threats. U.S. forces especially point to attacks on troops in bases in the heavily Shiite south and the in provinces close to the Iranian borders as proof that Iran-supported militias are growing stronger.

Such militias could pose a threat to infrastructure in southern Iraq, which accounts for 80 percent of Iraq's oil production.

"The militias have been for a long time trained and supported by Iran, and it depends on the type of militia how strong those ties are," said Buchanan when asked to assess the risk to southern infrastructure. "But they're going to continue to be there, and, you know, my, my long-term concern – this is not a concern for the next six months or next year, but long-term – they're going to still be beholden to those who support them in Iran."

Buchanan said long-term instability could hamper Iraq's oil plans, which include boosting export capacity through the northern Arabian Gulf to more than 8 million barrels per day (bpd) by adding new oil terminals and repairing old ones.

"And what I get concerned about, especially when it comes to the oil industry, is as Iraq's potential starts really coming online in a couple years, and their ability to export goes way up, they are going to become far more important as far as a member of OPEC and also will be seen as much more of a potential competitor with Iran," Buchanan said. "And so, you know, a long-term concern is what -- is Iran going to employ these militias somehow to effect that equation?"