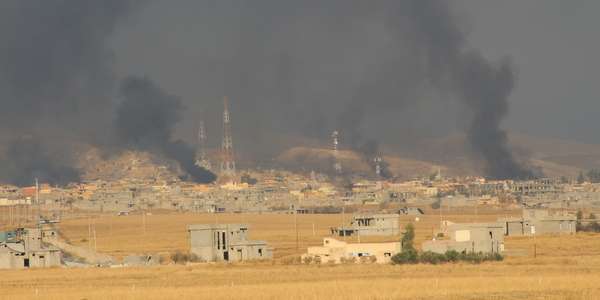 SINJAR - Kurdish forces liberated Sinjar on Friday, with a sudden burst into the city that defied the expectations of commanders who had been anticipating stiff resistance from Islamic State (IS) militants.

Peshmerga fighters inside the city were jubilant, but after 15 months under the control of IS fighters - and after dozens of air strikes by the U.S.-led coalition - the area is devastated, leaving Yezidi residents unable to return for now.

On Thursday, as Kurdish forces took control of towns and sections of highway around Sinjar, they encountered dozens of improvised explosive devices (IEDs), and IS fighters launched several attacks using suicide truck bombs. But these defenses merely delayed a massive operation advertised weeks in advance by Kurdish officials.

By Friday, there was only token resistance mounted by remnants of the IS group, who could be seen escaping to the south as Kurdish troops advanced from both the west and east.

Commanders in the Kurdistan Regional Government's (KRG) security forces said they overheard radio communications in which IS leaders threatened soldiers with execution if they were to flee. But in Mosul, IS leaders appeared to be casting the retreat as a tactical withdrawal; an IS militant told Iraq Oil Report that IS soldiers "suddenly withdrew from villages in Sinjar before the start of the Sinjar operation."

The initial plan had been to cut off the city from both the east and west, so that forces massed immediately to the north could enter Sinjar for urban fighting, according to a Thursday briefing by a commander on the western front. But in the end, Kurdish forces from all sides found they could enter the town with almost no resistance.

Coalition airstrikes were pervasive and proved decisive. Col. Steve Warren, spokesman for the U.S.-led coalition, said the offensive involved a total of 250 air strikes that took out around 200 IS militants.

On Thursday, IS fighters set fire to stacks of tires in an attempt to cloud the skies with smoke and obscure visibility from above. But coalition jets also appear to have flown low-flying strafing runs; throughout the day, the constant swooping roar of A-10 jets could be heard.

Peshmerga soldiers composed the largest force in the fight, with 7,500 fighters deployed across the three fronts, according to the Kurdistan Regional Security Council.

Thousands of Kurdish militiamen, including members of the People's Protection Force (YPG) and the Kurdistan Workers' Party (PKK), took part in the offensive. A variety of Yezidi soldiers also participated in the operation - some organized into independent militias, some affiliated with the PKK, and others incorporated into Peshmerga units.

It was slow going to deploy forces into the fight.

Iraq Oil Report was embedded in a motley convoy of tanks, ageing Humvees, pickups and five U.S.-donated MRAPs. Leading the way was an improvised mine clearing truck that looked like a mutant vehicle featured in a Mad Max movie. Many vehicles bore orange flags on their roofs to identify themselves to coalition jets and drones that could be heard flying above.

It took several hours to descend the winding dirt road to the bottom of Mount Sinjar - a journey that would normally take half an hour on foot. Some vehicles got stuck or broke down. The threat of IEDs caused the convoy to stop at the village of Gabara, halfway down the mountain.

Peshmerga tanks queue to head down Mount Sinjar ahead of an offensive on the city, Nov. 12, 2015. (PATRICK OSGOOD/Iraq Oil Report)

At the foot of the mountain, two car bombs detonated, killing at least two Peshmerga, according to an officer near the scene who declined to give his name because of an official edict against mentioning casualties.

The convoy reached the highway at the western base of Sinjar Mountain around noon, and began demolishing dirt berms that had been erected by IS militants. Heavy fighting could be heard in the nearby village of Wardiya, 12 kilometers west of Sinjar. Peshmerga shot mortars into the area from the north, and a truck bomb blew up, having been hit by a mortar, a rocket, or an air strike.

The convoy barreled along Highway 47, and split into two groups about six kilometers west of Sinjar, fanning north and south to establish a partial perimeter. Elite Peshmerga units headed south, taking over a former Iraqi Army brigade base. Diggers came forward to excavate a trench.

A PKK commander sitting cross-legged on a house north of the road peered at Sinjar city through binoculars atop a water tank and said his group, working with affiliated Kurdish and Yezidi militias, had already cleared villages to the west, having started their offensive two days earlier.

The group had simply ignored calls from the KRG to stand down, and the commander said he passed on coordinates to the coalition via his superiors to avoid getting hit by coalition airstrikes.

They’d taken up a position in a house daubed with child-like IS graffiti. A gaggle of young fighters under his command, most in their teens, hung around the house and posed for photos. Peshmerga from a special forces unit watched from their Humvees across the street.

As the commander talked, another truck bomb detonated in a village to the east.

It is not clear how much territory was secured by the PKK and their aligned militias because the KRG restricted reporters from embedding with non-Peshmerga groups.

The KRSC announced close to noon on Friday that the town’s grain silo, a tactical high point overlooking the city, had been taken by Peshmerga. But social media posts by Kurdish militia groups showed fighters raising a flag from the YPG, a Syrian Kurdish militia, above the silo before that.

Assorted vehicles from Peshmerga units and irregular volunteers queue haphazardly to head down Mount Sinjar ahead of an offensive on the city, Nov. 12, 2015. (PATRICK OSGOOD/Iraq Oil Report)

By late morning Friday it became clear the offensive was won. Along a highway north of Sununy, a 60-car convoy sped toward the front. Checkpoint guards along the route said it contained acting KRG President Massud Barzani, who would later give a victory speech from the mountain.

"As we had promised, we have liberated Sinjar," Barzani said, with the city smouldering in the backdrop. 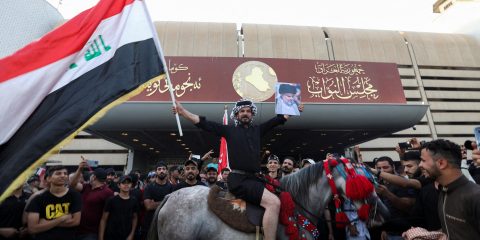 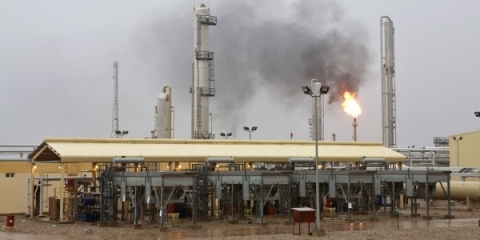