A joint assault on the IS-held town of Sinjar is slowly unfolding, with Kurdish government and militia forces, including Yezidi units, sharing the battlespace. 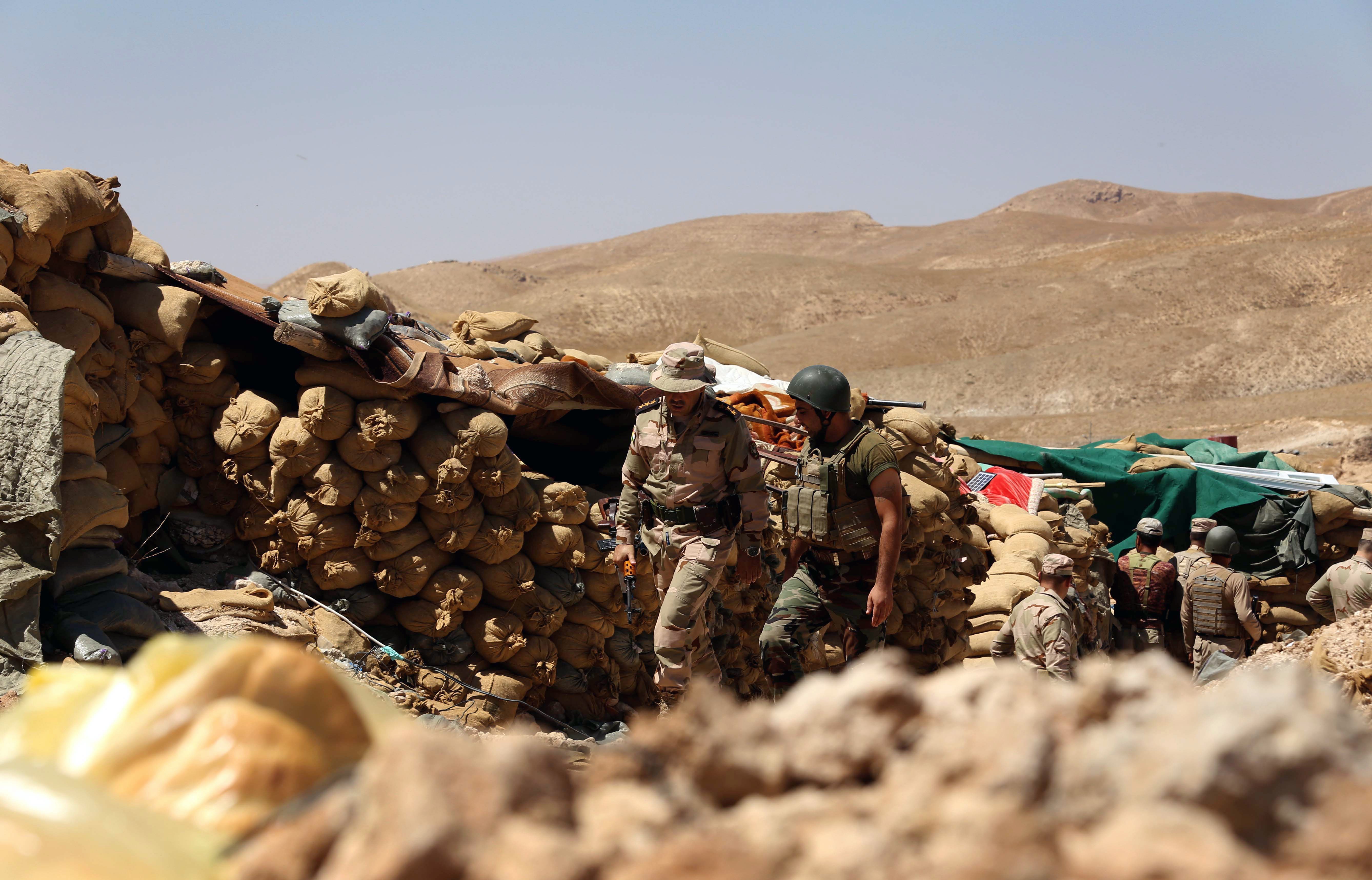 Peshmerga fighters guard a position behind sandbags at the frontline against Islamic State (IS) militants near the northern Iraqi town of Sinjar, west of the city of Mosul, on Aug. 17, 2015. (SAFIN HAMED/AFP/Getty Images)
By Patrick Osgood, Rawaz Tahir and Staff of Iraq Oil Report
Published Thursday, November 12th, 2015

SINJAR DISTRICT - Thousands of Peshmerga affiliated with the Kurdistan Democratic Party (KDP) have massed weapons and troops in positions overlooking Sinjar, preparing for an operation to retake the town along with the Yezidi militias and Kurdish factions that were competing to take the lead only days ago.

U.S.-led coalition aircraft, which have stepped up bombing raids in and around Sinjar over the past two weeks, were heard Wednesday running more than a dozen sorties from 8:30 p.m. until after midnight on Thursday, which multiple Peshmerga and militia leaders described as setting the stage for a ground assault.

"The airstrikes have protected us," said Peshmerga Major Jawad Gardi, speaking in a camp on the west side of Mount Sinjar. "They've prevented us from suffering higher casualties."

American and Kurdish military officials and politicians have not kept the plan a secret, telegraphing in press conferences and statements online that a ground and air assault was to be expected throughout this terrain controlled by the so-called Islamic State (IS) group.

Retaking the town and its environs would significantly reduce the IS group's territory in Ninewa province and cut a key supply line between Mosul and Raqqa, the group's capital in Syria – two major accomplishments in the stubborn war of nearly two years.

"Sinjar is important because it's between Baaj and Tal Afar," said a commander of the Special Forces Anti-Terror unit based on the western front, who declined to be named. "If Sinjar falls, those two towns will also fall." Baaj is an IS-controlled town southwest of Sinjar, while Tal Afar lies between Mosul and Sinjar.

The fall of the three towns would largely cut Mosul off from IS-held territory in Syria. It could also begin a process of healing for the minority Yezidi population, which saw hundreds of thousands of its people killed, captured and displaced over the past year.

Sinjar was overrun by the so-called Islamic State (IS) group in August 2014, when KDP-aligned Peshmerga – the primary security force in Sinjar at that time – fled.

Thousands of Sinjar's Yezidi residents were killed, or captured and then targeted for slavery and rape. Around 400,000 Yezidi are in camps for displaced persons and other shelters in neighboring Dohuk and Erbil provinces, with some overflow in Sulaimaniya province. Several thousand have remained living on Mount Sinjar, whose slopes begin approximately 2 kilometers north of Sinjar town.

In the months since the IS group took over Sinjar, the mountain itself and areas surrounding it have been held by often-competing forces, aligned in the fight against the IS group but making power plays against each other as well.

The KDP, the dominant party in the Kurdistan Regional Government (KRG), has been working most closely with the U.S.-led coalition in preparation for the push into Sinjar. It also formed a brigade of Yezidi fighters as part of this effort.

Yezidis formed their own independent militias as well, the largest of which is the HPS. They have also joined units created by the YPG, the Syrian affiliate of the Kurdistan Workers' Party (PKK), which have been fighting the IS group in both Iraq and Syria. The PKK is considered a terrorist organization by Turkey, the U.S. and Europe because of the bloody campaign for Kurdish rights it has waged, killing Turkish security forces and civilians.

But the PKK and the YPG have held crucial territory in Ninewa province, providing a buffer for the KRG to protect its territory. Their presence has also angered KDP leadership, as well as Yezidi KDP members, who believe the groups will not relinquish the land after IS fighters are expelled. This concern has also been voiced – albeit in a more tempered fashion – by some independent Yezidis.

The rivalry between the groups delayed the operation to push into Sinjar, with rival factions sometimes blocking others from approaching the front or keeping supply lines open.

That jockeying appears to be mostly over.

Faqir Hasso, the second in command of independent Yezidi militia HPS, and a PKK officer whose nom de guerre is Haval Zaki, both said a meeting with the KDP and other parties on Wednesday led to a fragile, de facto bargain to share the battlespace, though no official alliance or formal agreement was reached.

The various groups that are massed at the mountain and in strategic locations for the assault will all participate, though the KDP's Peshmerga appear to have by far the largest force.

Hasso said the various fighting forces will be allowed to fly their own flag in the battle – a point of contention for the KDP that played a role in delaying cooperation last week – though was insistent this was not a formal alliance, just a tenuous understanding that all the disparate forces would participate in the operation.

Zaki said each fighting force will end up holding specific territory if Sinjar is retaken, though it was unclear whether specific areas of control have actually been agreed upon.

Both Hasso and Zaki spoke to Iraq Oil Report by phone from positions on Mount Sinjar.

Sinjar Mountain has also been protected by both the PKK and Peshmerga from the Patriotic Union of Kurdistan (PUK), the KRG's other political party with a dedicated security apparatus, which has retained control over small parts of Sinjar town immediately below the mountain.

The position has also forced the KDP to coordinate, leveraging a massive contingent of troops and firepower.

The friction among the various anti-IS forces has been evident as they have prepared for the operation to retake Sinjar.

As the hundreds of tanks, heavy weapons and armored vehicles, including those of the Peshmerga's 1st Artillery Support Division, wound their way through Mount Sinjar, past a shrine of red and green lights honoring Abdullah Ocalan, the PKK leader imprisoned in Turkey, children living on the mountain shouted, "Long live the PKK." (There were also cheers for all Peshmerga on this makeshift pre-war parade route.)

That enmity was matched online by the head of the KDP's foreign relations office, Hemin Hawrami, who posted a series of tweets deriding the PKK, in the hours after the forces reportedly sat together. He also posted numerous tweets alluding to an imminent attack on the IS forces holding Sinjar, though senior KRG officials had placed an embargo on media coverage for security reasons.

Peshmerga forces said they aren't planning for a quick win, though they don't believe Sinjar town is as densely populated by IS militants as other IS group strongholds, like Ninewa's Mosul and Fallujah, in Anbar province.

"I am expecting weak resistance from ISIS inside the city," said the commander of the anti-terror unit, which have skulls stenciled on their vehicles. "The challenge will be car bombs, specifically inside city, because they come from short range. We won't have time to take them out with rocket launchers."

The IS group has also prepared the territory with its trademark network of mines and booby traps waiting on the roads and in the houses, said Maj. Jamal Waisi Ali, the commander of an anti-mine unit that provides route clearance before and at the start of operations.

"We've already been down to the front today, within 400 meters of the ISIS position," he said, referring to the road – Highway 47 – linking Mosul to the Syrian border. "That highway is the front line."

He took reporters to a pickup truck loaded with defused improvised explosive devices (IED). His unit had found 23 within the first half hour of work on Wednesday, Ali said, as the contingent prepared to bed down in 5 degree Celsius temperatures.

The mood at the western Peshmerga camp was warm. Soldiers ate soup and rice and ribbed each other over cigarettes and tea. Some danced and sang around campfires.

"This will be easy, not a problem for us," said Ali, the bomb squad commander.

There remains a concern, however, that the IS group will follow its modus operandi of the past, unleashing raids in other areas to distract Peshmerga forces.

Maj. Aram Jalil, of the Khabat backup force in Gwer, southwest of Erbil, said they've received intelligence of a planned IS group offensive against Peshmerga, with particular increased risk when poor weather will protect against visibility from both the sky and across the frontline.

Outside Sinjar, coalition jets provided cover against such raids, screaming across the clear sky over the town. With the deep thud of each airstrike, Peshmerga let out a cheer.