Power struggles among rival Kurdish forces, several backed by the U.S., are frustrating a long-planned offensive to retake the city whose sacking drew the world’s attention to the IS invasion. 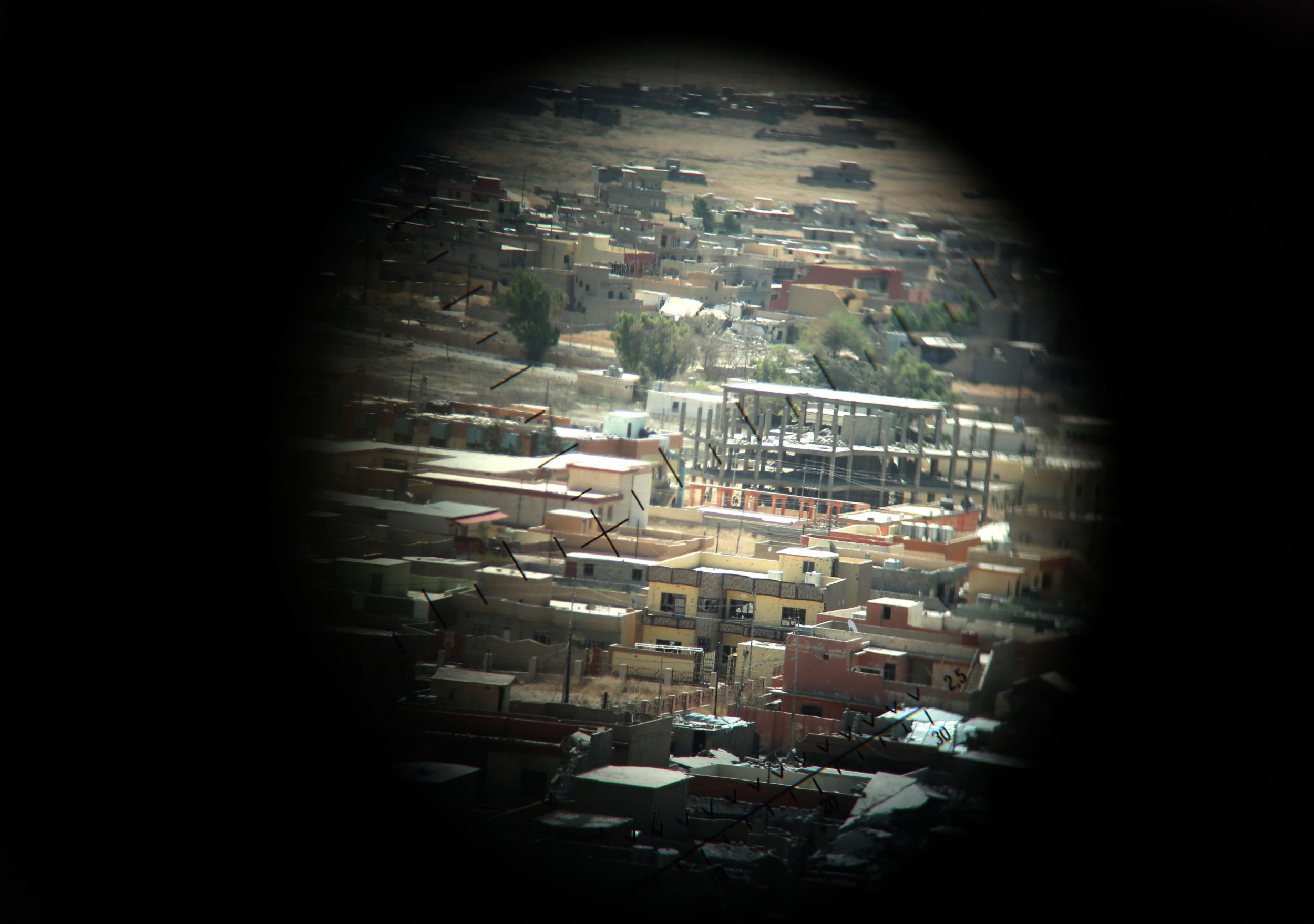 DOHUK - The Islamic State (IS) group's lightning takeover of much of the Ninewa province district of Sinjar, and the cataclysm against the Yezidi population that followed, sparked the first major foreign interventions into the anti-IS war last year.

But fifteen months on, Sinjar remains occupied by the IS group. Kurdish militias, Yezidi fighters, and Kurdistan Regional Government (KRG) Peshmerga forces have gathered at nearby staging areas to retake the territory, but the offensive has been delayed as those factions squabble over the political spoils of their presumptive victory.

Kurdish and Yezidi militias control several key routes to the front, and have blocked Peshmerga from passing, according to three militia commanders from units positioned in the Sinjar villages of Hardan, Barre and Shilo. The rivalries have complicated supply lines and logistics, and made it difficult for any single faction to launch a coherent attack against the IS group's positions.

Meanwhile, an estimated 400,000 residents who escaped Sinjar city and surrounding towns last year, primarily of the minority Yezidi community, remain mostly scattered across camps and informal settlements in Dohuk province, bracing for a second harsh winter displaced from their homes.

Several thousand are still living on Mount Sinjar, where U.S. commandos first set foot in IS group-controlled territory in August 2014. While thousands more fled, mostly to Europe, an unknown but large number were killed or remain captive of the IS group – mostly women, sold for forced labor and rape.

Recapturing Sinjar would not only begin to repair a human catastrophe, but might prove to be a critical strategic blow to IS militants.

“The city of Sinjar sits astride highway 47, which is one of ISIL's primary routes for funneling equipment and fighters between Mosul and Raqqa,” U.S. Army Col. Steve Warren, spokesman for the anti-IS coalition operation, told journalists on Friday. It is also a route used to deliver most of the goods needed by the million or so residents of Mosul living under the IS group's control.

But despite the overwhelming humanitarian and military benefits of re-taking Sinjar, the battle plan has been burdened by its political significance.

Sinjar district, in Ninewa province, has historically delivered votes to the Kurdistan Democratic Party (KDP) for additional seats, padding the party's representation both in Iraq's federal Parliament and in the Ninewa provincial council. And before the IS group's invasion, the KRG was touting Sinjar for possible oil and gas exploration to international oil companies, two industry officials briefed on the negotiations said at the time.

When the IS group invaded last year, Sinjar was guarded by KRG forces - primarily Peshmerga detachments loyal to the KDP - and their retreat was a severe blow to the prestige of the party ("For the KDP, the only way to regain popularity is to retake Sinjar,” said a senior KRG political insider briefed about the order of battle but not authorized to talk to the media.)

Many Yezidis now accuse the KDP of using the new offensive as a political tool, refusing to pursue useful military cooperation with any group not under their authority.

Various pan-Kurdish militia forces also stand accused of political opportunism. The Kurdistan Workers' Party (PKK) and its affiliates - most of which have gained in power via their fights in the Syrian civil war and a violent campaign against the Turkish government - surged into the area shortly after the KDP's retreat, and have expressed reluctance to relinquish Sinjar to the same forces that abandoned it.

"We have given 60 martyrs in areas like Shilo and Barre and 88 martyrs inside Sinjar so far, and the KDP wants us to liberate Sinjar for them and leave it," said Havel Rebrin, the head of an all-women Syrian Kurdish militia.

Caught in the middle is the Yezidi community – for more than a decade targeted by al-Qaida and now the IS group. Yezidi fighters have been forced to choose sides between the KDP and the PKK and its affiliates, dividing an already decimated people, despite ambitions for reducing reliance on others, especially for security.

The KRG, and in particular its dominant KDP party, have put on a full court press to win back the territory, recruiting an estimated 4,000 or so Yezidis into the Ministry of Peshmerga's forces, the KRG's army.

The alternative for Yezidis is even less political clout and money for both salaries and weapons. The YBS and its all-female counterpart, the YBSh, have weapons because they are an arm of the YPG and claim to have begun getting salaries from the federal government's al-Hashid al-Shabi (Public Mobilization) program. The HPS, an independent Yezidi militia, received salaries at the beginning of the year from the al-Hashid al-Shabi program, though not without angering the KRG, which then temporarily detained its leader.

Although they face a common enemy in the IS group, the rivalry among these many factions has delayed the offensive, and raises the risk either that Sinjar will be refortified by IS militants and prove prohibitive to retake, or that competing forces under bifurcated commands will increase casualties or even spark a turf war after the IS group is dislodged – even among Yezidis.

The commander of KRG-sponsored Yezidi Peshmerga forces in Sinjar, Qassim Shesho, told semi-official Rudaw TV that he blamed the Syrian-Kurdish militia YPG for delaying the Sinjar operation and warned them to leave as soon as it is liberated.

"We tolerate another atrocity in Sinjar but we don't tolerate the presence of YPG in the city," Shesho said, according to Rudaw. His cousin, Hayder Shesho, leads the HPS. It remains independent but recently allied with the YPG.

Over the last two weeks, 8,000 Peshmerga soldiers have been massing with heavy weaponry to staging posts close to the city, under cover of a U.S. air strike campaign, and to Mount Sinjar.

On Nov. 1 alone, coalition air forces, comprised overwhelmingly of U.S. jets, launched 29 airstrikes in support of the upcoming offensive, according to a Nov. 2 statement from the coalition command center and a tweet by senior U.S. anti-IS official Brett McGurk. Over 100 strikes in and around Sinjar were reported by the coalition throughout October, clearing the way for the now uncertain ground offensive.

Peshmerga plan to retake the 80 percent or so of Sinjar still in IS hands, then install Yezidis they have recruited and trained to garrison the town as other units push out into villages and hamlets to the south, making the area safe for resettlement, according to the Peshmerga official.

Kurdish and Yezidi militias have also been on the march to consolidate positions in and around Sinjar. The senior KRG political insider, also briefed on militia movements, said the various militia groups are fanned out close to the north of Sinjar city on the mountain.

These PKK-affiliated and -aligned groups, including independent Yezidi militias, have now confederated under coordinated command as the “Shingal Alliance,” after the Kurdish name for Sinjar. (Independent Yezidi militias at one point grew to several thousand in number, before losing recruits due to a lack of weapons and money, a factor that has pressed them closer to the PKK.)

As the various anti-IS factions have stepped up their antagonism against each other, military officers have forsworn the possibility of fighting each other. But they have also been aggressively jockeying for position and control of key supply routes.

On Oct. 25, the Shingal Alliance was prevented by a Peshmerga deployment from accessing the east side of Sinjar mountain. The next day, PKK and allied fighters blocked off a road up the mountain, preventing a large Peshmerga continent from accessing the front through territory administered by the YPG, the PKK's Syria affiliate.

“Instead of cutting a road used by IS, they cut ours, so we cut theirs,” said Rebrin, the female Kurdish militia leader in Sinjar.

Officials from the Ministry of Peshmerga and the Kurdistan National Security Council both declined to comment for this story.

Underlying the tension between the KDP and PKK are the growing ties between Erbil and Ankara. The KRG's independent oil sales, an economic necessity that require Turkish approval, have increased while Turkey's ceasefire with the PKK faltered and then ended. In July, the PKK attacked the Iraq-Turkey Pipeline in southeast Turkey, costing the KRG hundreds of millions of dollars in lost oil revenue, though the PKK later claimed the attack was the result of freelancing by a local unit, and wouldn’t happen again.

The U.S., Europe, and Turkey, meanwhile, list the PKK as a terrorist group because of a violent separatist campaign over the past decades. The U.S. is increasingly cooperating in Syria with the YPG, which the U.S. insists is a distinct group, though the organizational distinction is largely semantic. (In Iraq, the PKK fights on several fronts and works closely with affiliated militias, and a huge shrine to the group’s co-founder Abdullah Ocalan, imprisoned in Turkey, decorates the main road up to Sinjar mountain from the north.)

Jamal Haji, a senior official in a local Yezidi political group affiliated to the PKK, said U.S. forces on the ground, which he called “medical teams,” had been working to defuse disputes. The routes closed on Oct. 25 were reopened two days later. Further Peshmerga deployments through the town of Khanasor north of Sinjar mountain were also permitted by YPG fighters.

"If we had not been patient, we would have run into a big fight with KDP," said Faqir Hasso, the second in command of Hayder Shesho's HPS, the popular Yezidi militia fighting for more than a year on Mount Sinjar.

At the time each side was closing off access routes for each other, commanders in the Shingal Alliance were adamant that they would prevent Yezidi Peshmerga mobilizations.

“If the Yezidis that are with the KDP drop their Peshmerga uniform and join us, we are going to let them in, otherwise no-one who smells of KDP will be let in,” said Haji.

Three PKK-aligned military officials in Sinjar, each in different militias, said this has delayed the offensive indefinitely. They claim to have their own offensive strategy, and have requested the KDP Peshmerga join them in the fight. But they say that taking Sinjar without Peshmerga coordination is impossible while airstrikes coordinated between the U.S. and KDP-aligned Peshmerga forces continue in and around the town.

"It is not about the number and size of forces, it is about having a good plan and airstrikes support," said Rebrin.

The senior KRG insider accused the militia groups of holding territory to establish a territorial foothold similar to the PKK's positions in the Qandil Mountain, in northwestern Iraq, from which attacks in Turkey are allegedly planned.

"The PYD and PKK are not there for Yezidis, they are there for the mountain," he said, reflecting the power struggle between the Iraqi Kurds and those still fighting for autonomy in Syria and Turkey. "Sinjar mountain is a very strategic area, you can control the area from it, like Qandil."

The KDP and the Yezidi militia's HPS have also competed in the face of a looming fight against the IS group in Sinjar – over which party's flags can be flown on the mountain and, presumably, after the town is liberated. For now, however, the rival forces can only look down on Sinjar, and the only flags there are black.