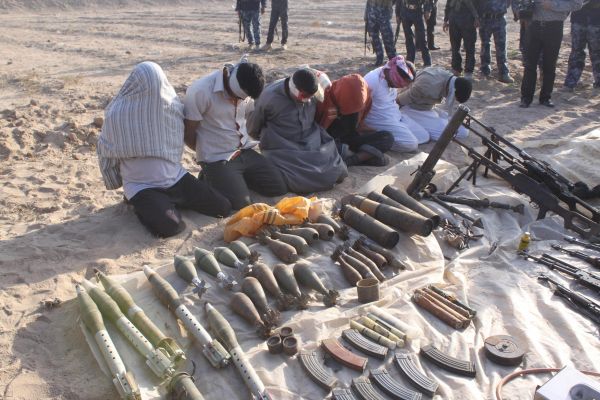 Six suspects in the Dec. 13, 2011, bombing of the pipelines outside the Rumaila oil field, in front of a cache of weapons. (ALI ABU IRAQ/Iraq Oil Report)
Ali Abu Iraq, Ben Lando, Adam al-Atbi and Staff of Iraq Oil Report

BASRA - Iraq's beleaguered security forces are touting a victory in one of the most crucial aspects of securing the country -- the arrest of what Oil Police officials call "a gang" that has been successfully targeting vital oil export pipelines in Basra, where the world's largest international oil companies are developing the country's sole source of income.

"We seized the possession of these perpetrators, guns, mortars and medium and light weapons and explosive devices, grenades, rocket launcher and explosives, as well as, different ammunition and a welding machine, cables and others items," Brig. Gen. Musa Abdul Hassan, the chief of the South Oil Police, said during a tour for journalists in a tomato farm where six blindfolded and bound suspects were kneeling in front of a cache of weapons and dozens of Iraqi security force members.