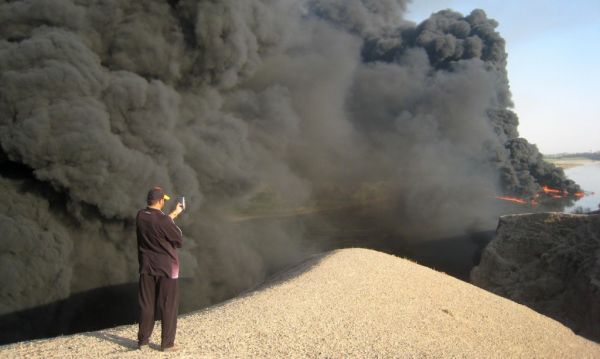 An Iraqi uses his mobile phone to take pictures of a burning oil pipeline, after a bomb attack in Beiji in September 2007. Attacks on oil infrastructure have subsided since the peak of the insurgency, though a spate of recent attacks has shaken the oil sector. (SABAH AL-BAZEE/Reuters)
Ben Lando of Iraq Oil Report

BAGHDAD - In the past three weeks, two successful bombings have disabled the country’s largest refinery and temporarily shut in a quarter of Iraq’s oil exports. The question on the minds of investors and Iraqis alike: do these security failures represent the beginning of a downward trend, or are they merely growing pains of a country emerging from a time of conflict?

Although security gaps allowed the bombings of Beiji and the northern pipeline, authorities have responded by making arrests, working quickly to repair damage, and assessing weaknesses to avoid future attacks. Government officials have moved swiftly to treat the symptoms of the recent violence – but not the underlying disease.