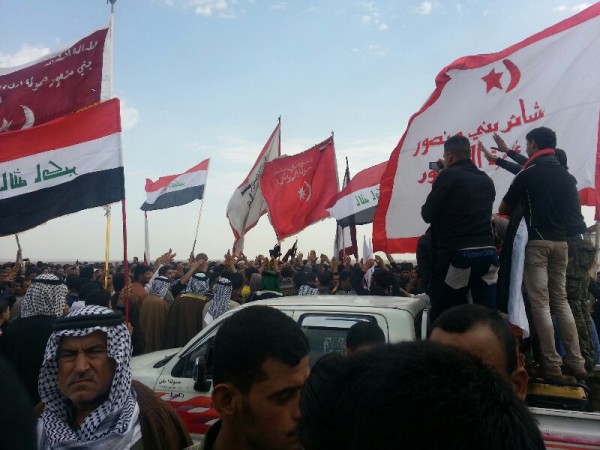 TALHA - On a farm above the super-giant West Qurna 1 oil field, Nadhim Abdul Sheikh's family has tilled the Basra soil for 200 years – but now he and his relatives find themselves without land or livelihood.

"They took the title to our property without our knowledge," said Abdul Sheikh. "This is considered a crime."

On Monday, Abdul Sheikh, of the Bahla tribe, was one of about 700 Basrawis who took to the streets in protest of problems associated with West Qurna 1, which is being developed by ExxonMobil. They gathered in the Talha area, about 110 kilometers north of Basra city, demanding both oil field jobs and payment for private land that has been lost or damaged by oil operations.

"We have become farmers without land," said Mohammed al-Traim, the sheikh of the Beni Mansour tribe. "We demand jobs for our sons and compensation for our land."

The protests come at a sensitive time for Exxon, which has more than doubled production at the 8.7 billion barrel field, to about 450,000 barrels per day (bpd), under a contract signed in 2010.

The American super-major ran afoul of Baghdad in October 2011, when it signed six deals with the semi-autonomous Kurdistan Regional Government (KRG), defying an Oil Ministry policy that condemned the Kurdish contracts as illegal. In the ensuing political standoff, the central government has pressured the company to choose between its West Qurna 1 and KRG deals, and threatened Exxon with military action if it begins working the exploration blocks in the "disputed territories" between the KRG and Baghdad-controlled Iraq.

As that crisis became increasingly unstable in late January, Exxon CEO Rex Tillerson made an unprecedented visit to Baghdad for a meeting with Prime Minister Nouri al-Maliki. The details of that meeting have not been made public, but Tillerson's presence underscored his company's deepening engagement and influence in Iraq.

One of Exxon's allies has appeared to be Basra Governor Khalaf Abdul Samad. Shortly after Tillerson's visit, Samad praised the company at a Jan. 23 event held at its Basra headquarters, saying that Exxon had "kept its promises in hiring locals."

But the protesters near West Qurna said they are not satisfied.

"The young men from the Beni Mansour tribe came out… to claim their rights to employment and compensation for their damaged land," said Basim Saleh, a local mayor.

Members of several other tribes were also represented, and higher-ranking provincial leaders said they were taking the protests seriously.

"We will raise the demands to the central government and strive toward fulfilling the protesters' legitimate demands," said Fareed Khalid, the chairman of the Basra government's energy committee.

The Iraqi government has implemented a program to compensate residents for any land lost to oil development, but it has run into several logistical and political problems.

Many farms have been passed down through generations, across a span of several decades and multiple regimes, making it difficult for authorities to establish boundaries and titles. As a result, some people have not been paid at all, and others have not been paid for all the land they claimed.

Moreover, residents have complained that the committee distributing compensation payments has under-valued their former property.

"Compensation for one donum (six-tenths of an acre) is about one million Iraqi dinars ($833)," said Abdul Sheikh. "But if we had the chance to grow tomatoes in that one donum, we could make more than 5 million dinars."

Other protesters complained that compensation payments were not only paltry but arbitrary, ranging from 950,000 dinars ($792) to 1.35 million dinars ($1,125) per donum.

"Even those who were compensated, they did not receive rewarding compensation," said Rahim Mohamed Johar, the head of the local city council.

Deprived of their farms, many residents have expected to find employment with the field's operator, Exxon, minority partner Royal Dutch Shell, or the state-run South Oil Company with whom the consortium is contracted and partnered. Members of the Basra government and South Oil Company have agreed to meet with locals on Thursday to discuss their concerns.

The companies have already made efforts to hire locals, yet they have also run into a hard economic reality familiar to poor populations in oil-rich countries around the world: although oil operations require enormous capital investment, they provide relatively few jobs.

Agriculture, on the other hand, has historically been one of the largest sources of non-state employment in Iraq. The loss of farmland thus has an economic impact that is felt more sharply by ordinary citizens than the effects of rising export revenues and GDP.

"Most of the protesters' demands," said Saleh, "are outside the powers of the compensation committee."