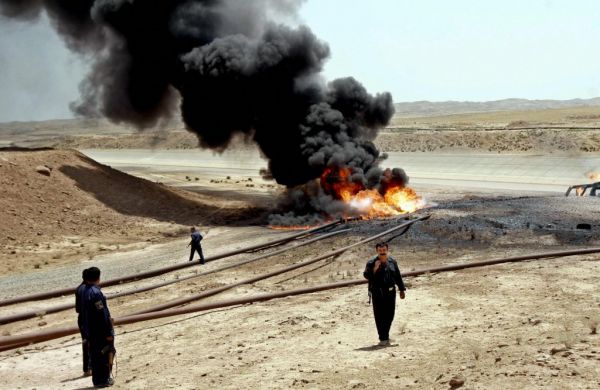 Iraq’s Oil Police secure the site of a burning oil pipeline near the northern city of Kirkuk on July 3, 2006, after it was bombed by insurgents. (MARWAN IBRAHIM/AFP/Getty Images)
Staff of Iraq Oil Report

KIRKUK - A top police official in Kirkuk said nine improvised explosive devices (IED) were discovered Wednesday at the Kirkuk pipeline, the most recent of security threats against the oil sector in the north.

"The police neutralized nine improvised explosive devices that had been planted under the oil pipeline from the oil wells west of Kirkuk," said Brigadier Sarhad Qader. He said Iraqi Army explosives experts defused the bombs, which were planted along the pipeline sending crude from the wells to the gas and oil separation units in the Dibis district, 45 kilometers west of Kirkuk.