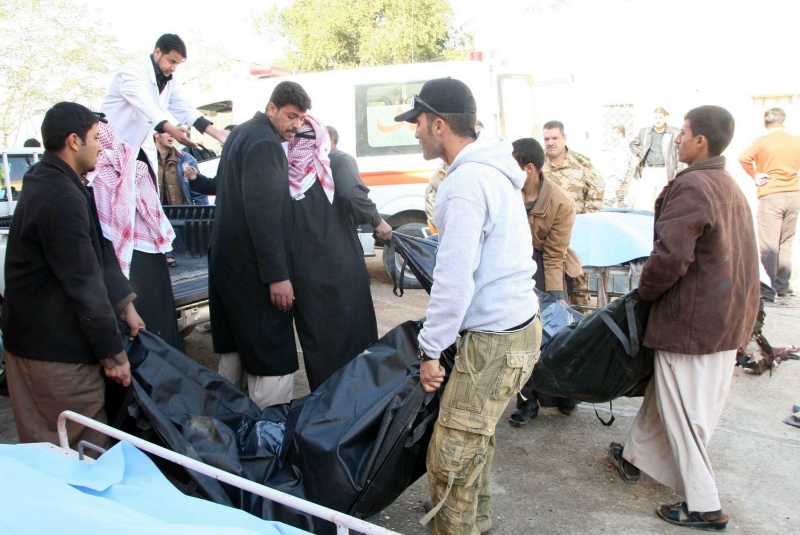 Residents transfer the bodies of bomb attack victims to a hospital in Tikrit on January 18, 2011, after a suicide bomber wearing a vest filled with explosives attacked Iraqi police recruits. In Salahaddin province, local government officials, security forces, and oil infrastructure - as well as ordinary citizens - continue to suffer from insurgent violence. On Tuesday, the photographer who took this picture was among the victims when a team of attackers murdered 55 people at the provincial council headquarters in Tikrit. (SABAH AL-BAZEE/Reuters)
Ben Lando and Staff of Iraq Oil Report

SULEIMANIYA, IRAQ - A team of insurgents dressed as Iraqi security forces launched a highly organized attack on the Salahaddin provincial council building in the northern city of Tikrit on Tuesday, killing at least 55 people, including three council members and two journalists.

In the past six weeks, Salahaddin province has suffered a wave of violence, much of it targeting the oil sector. On Feb. 26, gunmen attacked the Beiji refinery, Iraq’s largest, killing two workers and detonating bombs that crippled the facility. A week later, the northern oil pipeline to Turkey was bombed near the border of Nineva and Salahaddin provinces, temporarily shutting in a quarter of Iraq’s exports.