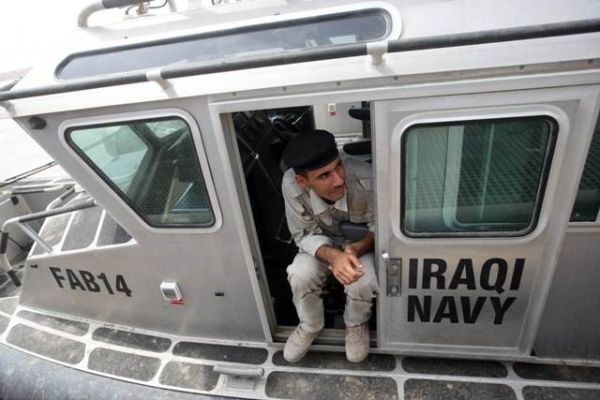 An Iraqi sailor sits on the deck of a navy vessel as Iraq inaugurated the first in a fleet of new US-built patrol boats on September 26, 2010, part of efforts to boost its naval capacity and secure key oil platforms ahead of an American withdrawal at the end of next year at the Umm Qasr Naval Base. (AHMAD AL-RUBAYE/AFP/Getty Images)
Ben Lando of Iraq Oil Report

BAGHDAD - Two weeks before the Nov. 22 expiration of a UK training mission to prep the Iraqi Navy to guard its oil terminals and other northern Arabian gulf territories, the Council of Ministers quietly approved a six-month extension.

Iraq's navy and marines are being equipped and trained by both American and British forces in the port of Umm Qasr and other areas on the coast and in the sea, most importantly the two oil terminals that account for 80 percent of the country's oil exports.