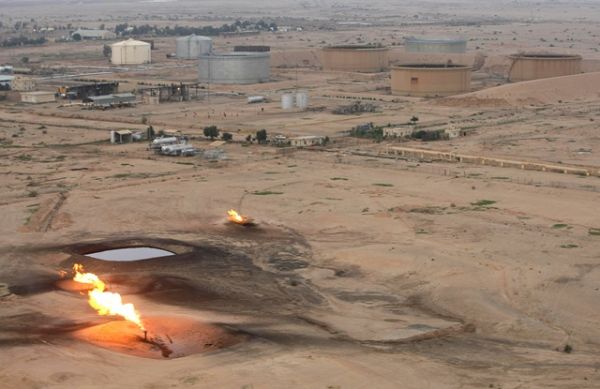 An aerial view shows the Halfaya oil field near the southern city of Amara on January 25, 2010. A consortium led by China's CNPC was awarded the contract for Iraq's Halfaya oil field, which has proven reserves of 4.1 billion barrels of oil. (ESSAM AL-SUDANI/AFP/Getty Images)
Ben Lando of Iraq Oil Report

BAGHDAD - The Chinese oil company leading the development of the Halfaya oil field has offered to rehabilitate an Iraqi military airfield, which it would use to shuttle equipment and workers into the country.

Mohanned Hameed al-Hashimi, spokesman for the governor of Missan, Mohammad al-Sudani, said the Chinese National Petroleum Corp., Total of France and Petronas of Malaysia, have all been involved in talks about the development. It's not clear whether Petronas and Total, junior partners in CNPC's Halfaya project, are collaborating on the airfield project or not.