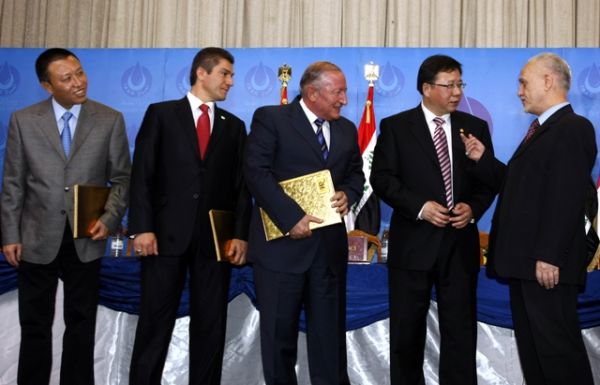 Then-Iraqi Oil Minister Hussain al-Shahristani (R) speaks with China's energy giant CNOOC director Yang Hua as Turkey's TPAO director Mehmet Uysal listens on following the signing of an oil deal in Baghdad on May 17, 2010, while other members of the delegation look on. Buoyed by projected oil revenues and discontent with Baghdad, the provinces of Missan, Basra and Dhi Qar are seriously contemplating forming a semi-autonomous federal region. (SABAH ARAR/AFP/Getty Images)
Ben Lando of Iraq Oil Report

BAGHDAD - Iraq's Missan province, made famous by a brief Iranian incursion into an oil field in December, is set to become the second-largest oil producing province in Iraq after Chinese and Turkish firms signed a development deal Monday for three of its fields.

The Buzurgan, Abu Ghirab and Fakka oil fields – which hold more than 2.5 billion of Iraq's 115 billion barrels of oil reserves – were offered to international oil investors in a June 30 auction. The Rumaila oil field was the only project awarded at that auction, out of six oil and two gas projects on offer.