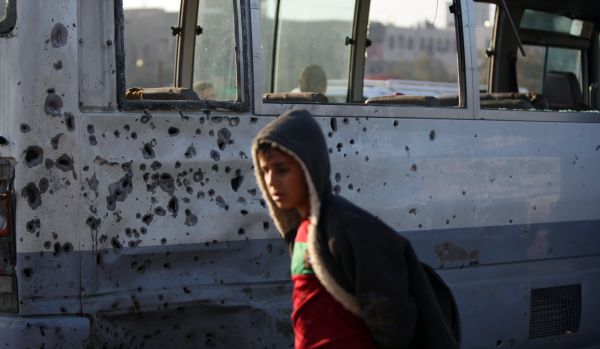 A boy walks past by a bus damaged from shrapnel after an explosives-laden motorcycle detonated near a group of day laborers on Jan. 5 in Baghdad's Shiite district of Sadr City. (AHMAD AL-RUBAYE/AFP/Getty Images)
Staff of Iraq Oil Report

BAGHDAD - Iraq's streets exploded with internecine violence Thursday as a string of bombs killed at least 68 people. Meanwhile, a political crisis continues to split leaders largely according to sectarian and ethnic loyalties.

Thursday's deadliest incident took place on a road about 40 kilometers west of Nassiriya. Shiite pilgrims were walking to the holy city of Karbala, in a ritual observance of the upcoming holiday of Arbayin, when a suicide attacker detonated a vest laden with explosives, killing 44 people, according to a senior Interior Ministry official.