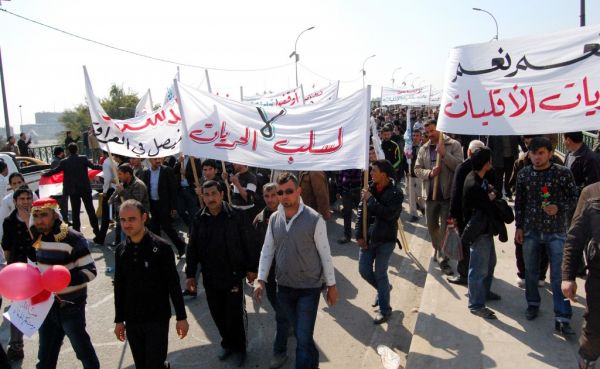 Protesters marching across Baghdad's Sinic Bridge towards Tahrir Square on Monday voiced dissatisfaction with a government that has failed to provide reliable access to electricity and other basic services. (BEN VAN HEUVELEN/Iraq Oil Report)

BAGHDAD - Iraq's Electricity Ministry is rolling out a plan it hopes will offset expected power shortages this summer, following weeks of protests in Iraq and a wave of popular revolt in the region that has swept out two long-standing dictatorships.

Unlike those regimes, Iraq’s government was democratically elected – but it is still capable of provoking impassioned demonstrations. Summer protests in 2010, born of frustration as Iraqis suffered 120-degree heat without the power to run their air conditioners, forced out the electricity minister.