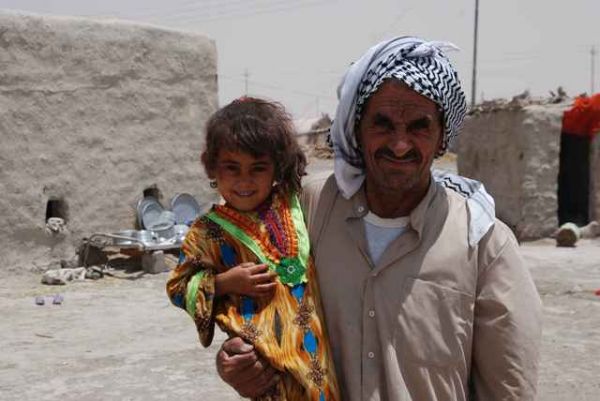 Haloob al-Hamdani of the al-Muhitat village, holding his daughter, is among the thousands of Basrawi farmers being told to leave their land because it sits above the province's oil reserves. (STAFF/Iraq Oil Report)
staff of Iraq Oil Report

BASRA, IRAQ - The traditional harvest of this ancient Basrawi village are no match for Iraq's cash crop – oil. The 250 families of Muhitat are among a growing number in southern farming villages being ordered by the Ministry of Oil to leave their land, beneath which lies the crude that will fuel the country’s efforts to quintuple its oil production.

"We used to cultivate different crops such as rice and wheat and we owned 1,000 palm trees each," said Sheikh Wasmi Faydhi al-Hamadani, the 60-year-old patriarch of the al-Muhitat village near the Silail marsh in northern Basra province and the West Qurna oilfield. "Water resources were largely available and it was a real paradise until the mid-nineties."