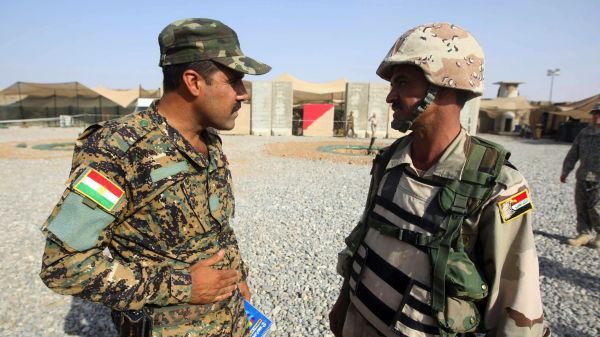 An Iraqi soldier (right) and a Kurdish peshmerga fighter, belonging to a combined security force along with U.S. troops, chat inside a military camp in Mosul on Sept. 21, 2010. (AHMAD AL-RUBAYE/AFP/Getty Images)
Ben Van Heuvelen and Staff of Iraq Oil Report

BAGHDAD - ExxonMobil's contracts in disputed territories are aggravating a tense eight-year standoff between Arabs and Kurds, and the company risks seizure of its equipment and attacks on its personnel if it begins work, according to senior members of the Iraqi government, members of Parliament from across the political spectrum, and leaders from Mosul and Kirkuk.