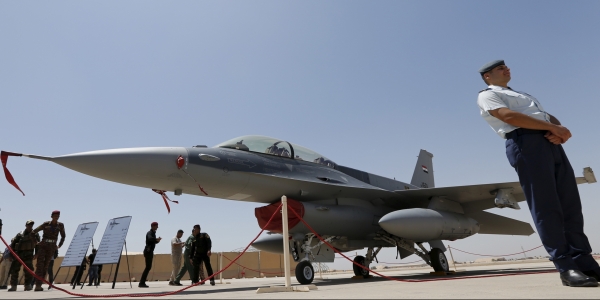 An official ceremony at Balad base for Iraq to receive four of these F-16 fighter jets from the U.S. on July 20, 2015. (THAIER AL-SUDANI/Reuters)
Staff of Iraq Oil Report

Last year, Iraqi F-16 fighter jets would swoop across the wide deserts of Anbar province twice a week, surveilling militants from the self-proclaimed Islamic State (IS) group. The pilots were “watching for leaks” across the Syrian border before heading back to the Balad airbase north of Baghdad, said a senior Iraqi official directly familiar with the program.

Now Iraq’s F-16 program “is almost gone,” the official said in interviews this month outlining the state of the high-profile fighter jet program. Three senior Western security officials familiar with the program confirmed that the program's operational effectiveness is diminished.

The decline of the F-16 program is just one example of how Iraq's security cooperation with the U.S.-led international coalition to fight IS has suffered from a rift between the Trump administration and the government of former Prime Minister Adil Abd al-Mahdi, which broke open more than four months ago after the U.S. assassination of Iranian Gen. Qassim Soleimani and deputy commander of Iraq's Popular Mobilization Forces Abu Mahdi al-Mohandis.