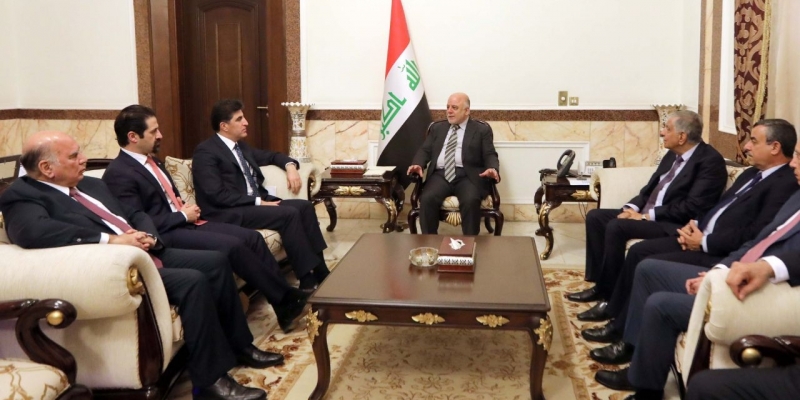 The International Monetary Fund (IMF) is throwing its weight behind objections raised by the autonomous Kurdistan region over Iraq's 2018 budget - a dispute that now threatens Baghdad's ability to access billions of dollars' worth of international loans.

The budget, passed by Parliament on Saturday, troubles the IMF for two reasons: not only does it allocate just 6.6 trillion Iraqi dinars ($5.6 billion*) to the Kurdistan Regional Government (KRG) - a steep cut compared to previous years – but it also lowers taxes and reduces the government's non-oil revenue.

"On both the revenue and expenditure side, the budget is not satisfactory," said Christian Josz, deputy division chief of the IMF's Middle East and Central Asian department, in an interview Thursday.

The IMF's Stand By Arrangement (SBA) outlines benchmarks that Iraq must meet in order to receive a series of loan disbursements totaling $5.34 billion. Iraq's participation in the program has also helped open up billions of dollars more in financing by providing confidence to other international lenders about the government's credit-worthiness.

The IMF's objections to the 2018 budget now effectively put the SBA on hold, however, preventing a periodic review that would unlock the next segment of lending.

"We understand that it is very unlikely there will be any correction to that budget before the election," Josz said. "I think the logical conclusion is that the [SBA] review cannot be concluded until a new government is in place and we have reached agreement with the new government."

Prime Minister Haider al-Abadi's economic team has bristled at the IMF's conditions, particularly related to the KRG, according to multiple people on the Iraqi side of the negotiations.

"This is an internal Iraqi political issue," said one senior Abadi administration official. "The IMF has no standing to tell us what to do."

KRG Prime Minister Nechirvan Barzani's government has told the federal government and the IMF that the Kurdistan region needs at least 9.6 trillion Iraqi dinars ($8.1 billion) to fund an austerity budget that pays reduced public-sector salaries, according to Josz. The 2018 budget falls more than 30 percent short of that threshold.

"The budget is not satisfactory because we think it's not enough to maintain macroeconomic stability in Kurdistan, which is an important region of Iraq," Josz said. "So, for that reason, the budget is clearly not in line with the SBA."

The KRG budget allocation has been a lightning rod for annual political controversy, but the stakes have recently grown much larger.

In October 2017, one month after the KRG held a politically polarizing independence referendum, Abadi ordered a military operation to retake control of Kirkuk. In the process, the KRG lost control of almost half the oil production capacity under its control.

Kurdistan had functioned with de facto economic independence since 2014, but the loss of Kirkuk's oil revenue was a dire financial blow to the KRG, which had already racked up more than $20 billion in debt. The balance of political power shifted dramatically as the KRG came under much more pressure to operate within the federal budget framework.

The prospect of re-integration presents a variety of unsolved problems: over the past decade, the KRG carved out its autonomy largely by establishing facts on the ground – via oil projects, pipelines, and international agreements – which Baghdad has consistently deemed illegal. Now, the budget law is demanding to absorb the revenues from those assets while the government simultaneously maintains its opposition to the contracts enabling them to operate.

For example, the budget law requires the KRG to hand over all of its oil exports - at least 250,000 barrels per day (bpd) - to be sold by the federal government, but it does not appear to allocate money for paying the companies responsible for that production.

"Nobody knows," said a second senior Abadi administration official, when asked how KRG oil companies would get paid under the current budget framework. "It needs a lot of technical work."

The IMF proposed an arrangement that would allow the KRG to deduct the costs associated with producing and exporting oil - such as IOC payments and pipeline transit fees - from its financial obligations to Baghdad, after validation by the federal Board of Supreme Audit, according to Josz.

But that proposal met opposition in Baghdad, where the Oil Ministry is wary that directly authorizing payments to oil companies in Kurdistan would amount to an implicit endorsement of their contracts.

"Those who signed agreements apart from the central government - it's not right," said the second Abadi administration official.

The KRG allocation is not the only deal-breaker the IMF sees in Iraq's 2018 budget.

Another problem is that, in revising the Cabinet's draft budget, the Parliament cut taxes - removing a 3.8 percent tax on wages and pensions that had been projected to generate about 2 trillion dinars ($1.7 billion), and cutting a sales tax from 10 percent to 5 percent.

Those changes move Iraq away from a key goal of the SBA, which is to diversify the government's revenue streams away from oil.

"That's a big tax cut that increases the non-oil deficit," Josz said. "On the non-KRG element of the budget, it's a significant departure with what we had agreed as part of the SBA."

Iraq could answer the IMF's major concerns by passing a supplementary budget law, though such legislation is unlikely to emerge before national elections in May. Facing re-election, politicians are reluctant to approve austerity measures that will directly affect their constituents – and many leaders are under pressure to take a hard line against the KRG, especially after a politically polarizing independence referendum.

"They will need a supplementary budget anyway because this budget does not include the results of the Kuwait conference," Josz said.

At a recent donor conference in Kuwait, Iraq secured $30 billion worth of pledges for sovereign loans and credit guarantees designed to help rebuild from the war against the self-proclaimed Islamic State (IS) militant group.

With the SBA on hold, it remains unclear whether the IMF's stance will affect that assistance.

Export credit agencies tend to set financing limits on a country-by-country basis based on risk assessments. The IMF's refusal to move forward with the next SBA review is likely to be interpreted as a negative indicator of Iraq's credit-worthiness.

* EDITOR'S NOTE: The Iraqi budget assumes an exchange rate of 1,182 Iraqi dinars to the U.S. dollar. All dollar-to-dinar calculations in this story use that ratio. The street exchange rate, however, is over 1,200 dinars to the dollar.