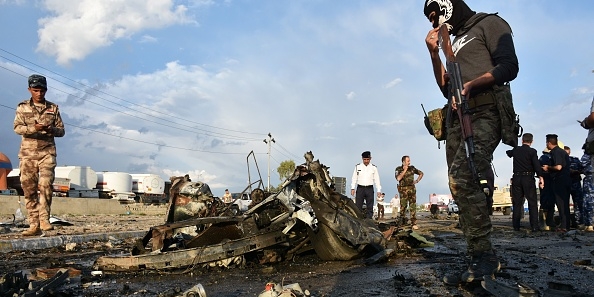 Iraqi security forces check the damage at the site of an attack involving a moped laden with explosives against a convoy carrying an Iraqi election candidate in the city of Kirkuk, on April 15, 2018. (MARWAN IBRAHIM/AFP/Getty Images)
Mohammed Hussein, Araz Mohammed, Amir Ali, Rawaz Tahir, Lizzie Porter and Staff of Iraq Oil Report

GARMIAN/KIRKUK - Insurgents from the self-proclaimed Islamic State (IS) militant group are evolving their tactics and launching increasingly bold attacks, as they continue to exploit chronic security gaps in northern Iraq's disputed territories.

In the most recent incident, late Tuesday night, two people were killed and four wounded after militants disguised as Kurdish Asayesh security forces set up a fake checkpoint near the Nasalah village in Garmian — a multi-district administrative area controlled by the semi-autonomous Kurdistan Regional Government (KRG) that includes the Gazprom Neft-operated Sarqala oil field.

"This area has been very safe, and Daesh elements never reached this area even in 2014," said Haval Ibrahim, a spokesperson for the Garmian administration. "This is the first time such a security problem happened in this area and terrorist elements have dared to set up a fake checkpoint."