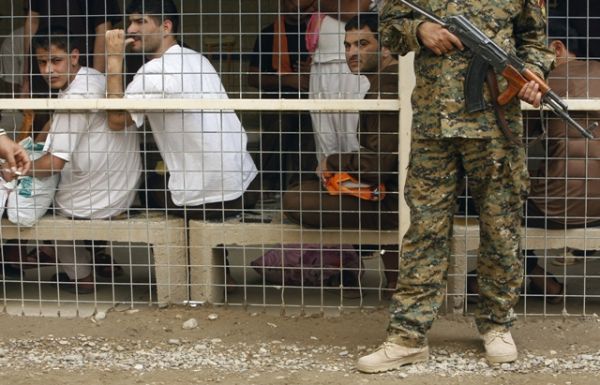 An Iraqi soldier stands guard in front of prisoners waiting to be released from al-Rusafa detention facility in Baghdad on April 29, 2010. Human Rights Watch interviewed 42 men who were recently transferred from the west Baghdad Muthanna jail, where they say torture took place, to Al-Rusafa facility, after details of misconduct were passed to the government. (SABAH ARAR/AFP/Getty Images)
Ben Van Heuvelen of Iraq Oil Report

The discovery last month of a prison in Baghdad where torture was routine wasn’t just a bombshell in the Iraqi press. The prison – first reported by the Los Angeles Times and followed by a scathing Human Rights Watch report – is a warning sign for anyone putting money into Iraq which, according to numerous recent reports, still allows for torturing of suspects.

Security has improved and violence has fallen to levels not seen since 2004, but foreign companies investing in the country still face an array of operational and reputational risks – from security problems, to labor disputes, to government human rights abuses.