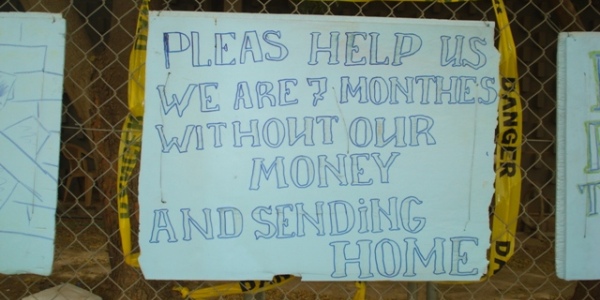 BAGHDAD - Denis Skopiuk, a 29-year-old worker from Ukraine, said goodbye to his young daughter, Emilia, and traveled to Baghdad for the promise of earning $2,500 per month building villas that would house heads of state attending the Arab League Summit. Like thousands of foreign workers, Skopiuk found Iraq’s huge demand for skilled labor too lucrative to pass up.

Several months later, however, in the midst of the Iraqi summer heat, Skopiuk and dozens of colleagues are stuck — without exit visas, their promised salaries, or even the money to buy a plane ticket home. On Aug. 5, when Emilia celebrated her third birthday, her father was still confined to a makeshift housing complex next to the luxury villas, which were never completed.

“All I am asking now is to get my exit visa and a plane ticket home,” Skopiuk said. “My family is waiting for me, and I don’t know what to do.”

Skopiuk and his fellow workers aren’t the only foreign laborers suffering in Iraq. Amidst a toxic mixture of lax contracting practices, rampant corruption, and lack of labor regulation, thousands of workers have been lured to Iraq by promises of outsize pay, only to find themselves betrayed and marooned.

“This is a very serious problem in the country,” said Livia Styp-Rekowska, who has coordinated humanitarian assistance for workers from the Baghdad office of the International Organization for Migration (IOM). “Many if not most of the foreign workers in Iraq are undocumented through no fault of their own, leaving them in an extremely vulnerable position. We are talking of many tens of thousands of foreign workers.” 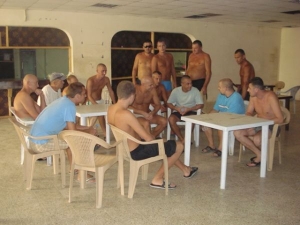 Ukrainian workers hired by the Salar Group under a contract with the Foreign Ministry to build housing for officials for the Arab Summit, which was postponed. The workers say they haven't been paid and have no way to go home. (STAFF/Iraq Oil Report)

Many foreign firms cut costs by outsourcing work to local or regional subcontractors, some of whom seek profits at the expense of both the quality of their work and the fates of their workers. In a country with few regulatory safeguards against such neglect, it’s up to investors to vet their potential partners. It's been a problem for not only private companies but also the Iraqi government and foreign governments, including the United States.

The purgatorial saga began for Skopiuk and his fellow workers last December, as the Foreign Ministry prepared to host the Arab League Summit, which was originally scheduled for March 2011. The ministry hired a company called Salar Group to build housing for the visiting heads of state near the old republican palace in Baghdad’s Green Zone. Salar recruited 217 workers from Ukraine, Bulgaria, and Nepal for the job.

The event was postponed — first until May, then to next year — due to the widespread protests that shook governments around the region. But even if the summit had happened, the dignitaries could not have stayed in the villas, which are still not complete. In April, construction stopped entirely.

When their jobs dissolved, the workers were trapped. Salar Group had neglected to get them residency permits, so they had unwittingly become undocumented immigrants who couldn’t find work elsewhere.

Of the 217 workers who were originally tasked to the site, several were moved to another project, while others took a one-time payment of $1,000 to return home, according to the IOM. Many could not afford to accept that offer, however, as the money was hardly enough to cover their plane tickets and just a fraction of their promised salaries. By the IOM’s count, 35 workers still remain; according to the workers, there are 43 Ukrainians and nine Bulgarians. 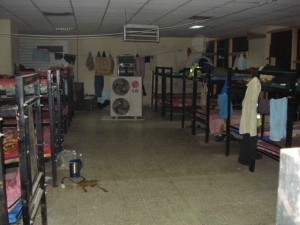 The living quarters of Ukrainian workers brought to Baghdad to build VIP housing for the Arab Summit. Most air conditioners don't work. The workers have no way to leave. (STAFF/Iraq Oil Report)

A 31-year-old worker named Alex — he declined to have his full name published — told a story that also reflected his comrades’ experiences.

Alex sat in the temporary housing complex that has become the workers’ indefinite home — a warehouse structure, divided by narrow corridors into one dining room and a few bedrooms packed with bunk beds. The air conditioners consistently fail against the desert heat, and the whole compound smells strongly of sweat; the workers spend their days in nothing but shorts.

The IOM has characterized the conditions as unsanitary. The men often lack electricity, adequate food, and clean drinking water. Several of the workers have suffered health problems.

“It’s like a prison here,” Alex said. “It’s an awful place to be. We don’t want to leave until we’re paid our money. But even if we wanted to leave, how could we leave without exit visas? Who will pay for our plane tickets? We don’t know what to do.”

When worked stopped in April, Alex said, Salar Group offered to pay the workers half of their salaries. The workers refused. Months later, when the desperate workers tried belatedly to take Salar’s offer, the company refused.

“We do not have money, we do not know how to get proper papers to leave this country, and we do not know whom to contact to solve our problems,” said another Ukrainian worker, 38 years old, who did not want to give his name.

Iraq Oil Report reached out to Salar Group, but company representatives repeatedly set and then postponed meetings and have not given any comment.

According to the workers, the Iraqi government has not provided any assistance or oversight. The Foreign Ministry, which let the contract for the villa construction, could not be reached for comment in time for publication.

“As an immediate step, their salaries need to be paid, for the employer to stop threatening them to leave the country without due remuneration and for the migrants to eventually be assisted home in a safe and dignified way,” said Livia Styp-Rekowska. “In this particular case we are fortunate that the migrants are in the International Zone and we have direct access to them. This is not true of the vast majority of the migrant exploitation cases we know about.”

In 2005 and 2006, as the new U.S. Embassy in Baghdad was under construction, Filipino workers were found forcibly kept in a warehouse near the airport. It was just one of many allegations of worker mistreatment – bordering on human trafficking, according to U.S. officials who investigated the claims – by First Kuwaiti Trading and Contracting, which was contracted by the U.S. government to build the embassy.

Earlier this year, in another instance of neglect, the Talaat Husamuddin Housing Company brought several dozen Sri Lankan workers to Al-Khair County in Missan province, 50 kilometers south of the city of Amara, and kept them for more than two years without pay or the ability to return home.

They were supposed to construct rural housing projects — part of a $200 million contract, in which Talaat agreed to build 3,000 housing units near Amara and another 2,000 in Nassiriya and Basra. Iraq Oil Report visited the construction site in Amara, where work has stopped and the buildings remain unfinished.

After stopping their work for Talaat, having received no pay and no legal status within Iraq, the Sri Lankan workers were desperate.

In late May, 33 of them climbed a tall building, carrying ropes with which they intended to hang themselves. A member of the Missan provincial council, Maitham al-Fartusi, eventually talked them down by relaying an offer of help from the governor, which included a promise of 250,000 Iraqi Dinars (about $200) per worker. Still, the Sri Lankans refused to leave Iraq without the pay they were due.

In early June, having seen little progress, the Sri Lankans went on a hunger strike. That protest ended when the governor, Ali Douai, visited them to give his assurances that he would intervene with the central government, who had signed the contract with Talaat.

On Aug. 2, a delegation from the Ministry of State for Marshland Affairs visited the workers and gave each of them $1,000 to pay for their travel home. The central government officials did not indicate that the workers would receive back pay for their years of labor or compensation for their detention.

“What is needed to stop this kind of exploitation is a comprehensive labour migration policy in Iraq and for the new counter-trafficking law to be passed by parliament combined with an effective system that protects trafficked or stranded migrants,” said Styp-Rekowska.