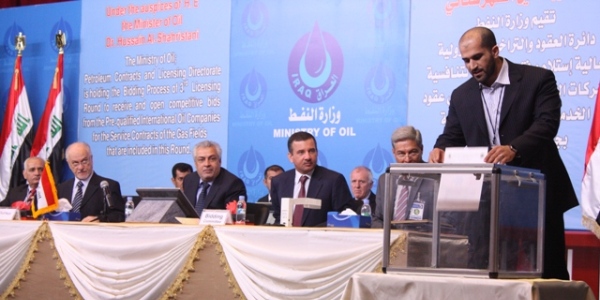 A representative of Kuwait Energy casts its winning bid for the Siba gas field as oil ministry leaders look on at the Oct. 20, 2010 licensing round. (BEN LANDO/Iraq Oil Report)
Staff of Iraq Oil Report

BAGHDAD - Iraq will auction 12 exploration blocks in March, not January as previously planned, in an effort to give its contract officials and the 46 pre-qualified foreign oil companies additional time to draft contract terms.

The new dates are March 7-8, a month and a half delay, which the deputy director general of the Petroleum Contracts and Licensing Directorate (PCLD) in the Oil Ministry, Sabah al-Sa'idi, said will allow for key meetings that would have had to take place during the Muslim Eid al-Adha holiday, Christmas and New Years.