As a new member of the COVAX facility, Iraq secures access to future vaccines — but in the meantime, other measures are needed to avoid a winter spike. 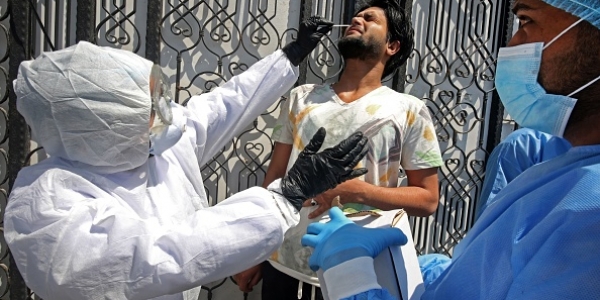 Iraq is joining a global alliance to procure future COVID-19 vaccines — a longer-term measure to combat a pandemic that is likely to worsen in the meantime.

“I don't expect the vaccine to be there before the end of 2020, maybe even early 2021 — let's hope and see,” said World Health Organization (WHO) Iraq Representative Dr. Adham Ismail, adding Iraq's caseload is expected to spike this winter.

“We are now talking about getting ready for a second wave without the presence of any vaccine," Ismail said. "We are facing the winter with nothing but preventative measures, and this is what we communicated to the ministry."

COVID-19 cases in Iraq are on the rise, following the relaxation of lockdown restrictions put in place this spring and the reopening of airports and borders. The country is now reporting more than 3,000 new cases and dozens of deaths per day, according to Ministry of Health figures. At least 319,035 have been infected and 8,555 have died so far.

If and when Iraq gets a vaccine, it will likely secure it via COVAX, an initiative co-organized by the WHO, an international vaccine alliance known as Gavi, and the Coalition for Epidemic Preparednes Innovations (CEPI). The program aspires to help countries diversify their sources of potential COVID-19 vaccines and provide wealthier and poorer nationals equitable access to whichever vaccines are ultimately approved.

"Iraq is part of the international coalition, Gavi, for vaccines with the WHO," Ministry of Health Spokesperson Saif al-Badr told Iraq Oil Report. "But as yet there is no vaccine anywhere in the world. The hope is that in the coming period — God willing — there is a vaccine approved, and we will start the process of contracts, and imports and usage.”

Ismail confirmed that Iraq "has signed an agreement with Gavi and the COVAX facility to buy [the vaccines] as soon as production starts," but he added that Iraq — like all countries in COVAX — will only secure enough doses to inoculate 20 percent of their populations. Ismail said those doses would include the semi-autonomous Kurdistan region.

COVID-19 vaccine trials are taking place in medical facilities across the world. COVAX says it has approved nine potential vaccines for financial support and development — seven of which are in clinical trials — and nine more potential vaccines are under evaluation for inclusion.

Iraq is also speaking to countries developing vaccines outside of COVAX, according to an Iraqi government official. Those negotiations include direct talks with Russia and China.

Ismail warned against outside arrangements, though, because the COVAX partners are uniquely qualified to ensure the quality of vaccines.

"That is the benefit of joining COVAX," Ismail said. "I don’t think it would be wise if they just, for example, went to the Russian vaccine, as we are not sure about its safety or efficacy.”

In an interview with Iraq Oil Report, Badr also said that Iraq has been talking directly with several countries about securing access to prospective vaccines, including the U.S. and Russia, but that any such deal would have to be approved by the WHO and Gavi.

“These are the criteria and the rules that we follow, as always," Badr said. "When a vaccine is developed scientifically, with the competent sides from any country in the world, Iraq will be among the first countries to import it for use."

The cost of Iraq's vaccine doses is projected to exceed $100 million, according to the WHO, raising questions as to how Iraq will pay for the vaccine given the country's ongoing financial crisis.

Badr said that when a vaccine is ready, government financing to pay for it will "undoubtedly be the priority."

A Gavi spokesperson told Iraq Oil Report that it’s too early to speculate about the costs of any vaccine because the cost per dose will vary by vaccine and manufacturer, how it needs to be delivered, and many other factors.

In the Kurdistan region, health officials are counting on the federal Ministry of Health to work in cooperation with the regional authorities to supply any future vaccine.

The Kurdistan Regional Government (KRG) is experiencing its own fiscal challenges, and cannot budget for vaccines, said Dr. Diyar Ibrahim, senior member of the KRG’s COVID-19 Task Force and Director General of the KRG’s Main Warehouses for Medicine and Medical Supplies.

“Assuming that a vaccine will be produced in the coming weeks and gets approved, Baghdad will purchase the vaccine and provide a share to the KRG based on necessities, because the KRG is not in a financial position to purchase vaccines on its own,” he said.

“I think once a specific vaccine will be approved by WHO, both the Iraqi federal government and the KRG will have emergency plan and budget to provide it,” said Dr. Dear Mohammed, the head of the KRG Ministry of Health Planning and Cooperation Department.

Meanwhile, Iraq’s health sector continues to feel the ramifications of the pandemic and fiscal crisis. Medical graduates and resident doctors across the country are continuing to strike in protest against a lack of jobs. A leading protest figure and doctor said that government officials must listen to medical workers, or they would find the hospitals empty.

Iraq’s regular child immunization program against measles, polio and other diseases has also been delayed because of COVID-19, according to the WHO.

Ismail said that, in the first few months of the COVID-19 pandemic, “there were some delays in vaccinating children" but that national immunization programs would soon kick off. "They fell behind for a few months, but they are on track now."

Cathy Otten reported from London. Lizzie Porter and Rawaz Tahir reported from Erbil. Iraqi staff reporting from Baghdad are anonymous for their security.