Oil ministers from the three countries agreed in principle to pipe Iranian gas to Iraq and Syria, and eventually to Europe. 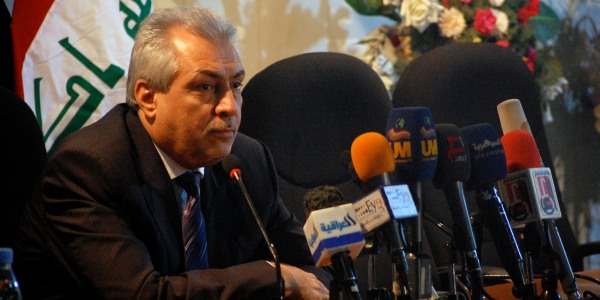 Iraqi Oil Minister Abdul Karim Luaibi gives a press conference in Baghdad in February 2011. In a meeting with his counterparts from Iran and Syria, Luaibi recently negotiated a memorandum of understanding that would export Iranian gas through Iraq and Syria. (BEN VAN HEUVELEN/Iraq Oil Report)
By Ben Lando and Staff of Iraq Oil Report
Published Wednesday, July 27th, 2011

Iraq has agreed to a memorandum of understanding that would send Iranian gas to Iraqi, Syrian and European markets, in the latest episode of a renewed strategic energy dialogue among former foes.

An Iraqi delegation signed the MoU during a meeting with Iranian and Syrian officials in Iran this week. Iraqi and Iranian officials, some speaking on the record and others on condition of anonymity, all say that many of the crucial details are yet to be worked out, including the volume of gas to be sent to market and the routing into Europe.