Many Iraqi commanders fighting an ongoing IS insurgency say a prospective U.S. military withdrawal would deprive them of crucial training and capabilities. 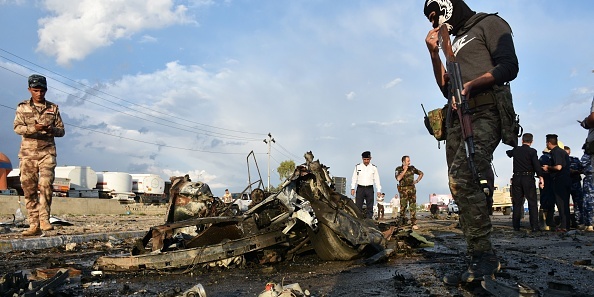 Iraqi security forces check the damage at the site of an attack involving a moped laden with explosives against a convoy carrying an Iraqi election candidate in the city of Kirkuk, on April 15, 2018. (MARWAN IBRAHIM/AFP/Getty Images)
By Staff of Iraq Oil Report
Published Thursday, January 9th, 2020

KIRKUK/FALLUJAH/KHANAQIN - A diplomatic crisis between Iraq and the U.S. is raising uncertainty and concern among Iraqi security officials responsible for beating back an ongoing insurgency being prosecuted by the self-proclaimed Islamic State (IS) militant group.

The militants have launched at least three attacks already in January, including the Wednesday bombing of an Iraqi Army convoy near Kirkuk's Jambour oil field, highlighting a persistent security challenge in which the U.S.-led coalition has been providing significant support – at a time when the Iraqi government is calling for the withdrawal of all foreign forces from the country.