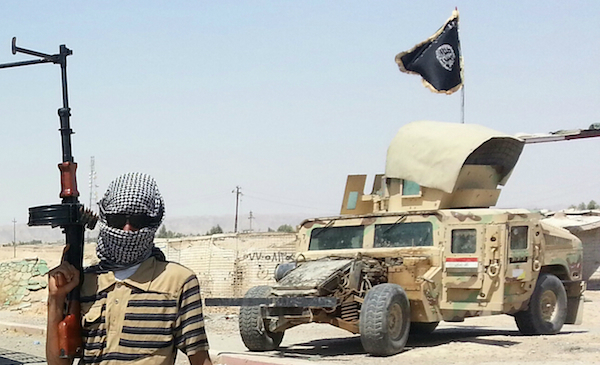 A militant stands guard on a road leading to the Baiji refinery. This photograph, taken in July 2014, was given to Iraq Oil Report by a technician at the refinery.
Staff of Iraq Oil Report

BAGHDAD - Fighters from the so-called Islamic State (IS) group have made their largest incursion yet into the Baiji refinery, seizing most of the compound from pro-government security forces who have been hampered by inconsistent supply lines and incoherent strategic planning.

Several security officials based in Salahaddin province – including one soldier from the 5th Brigade of the federal police who was reached by phone inside the refinery – said hundreds of fighters from the IS group (which is often referred to as "Daesh" in Arabic) have intensified their attacks over the past two days, using several car and truck bombs, suicide attackers, rockets, and heavy artillery.

"We have very little food and ammunition, and we can't withstand the suicide bombers, snipers and rockets," said the federal police officer, who was trapped inside the refinery along with about 50 other police as of Thursday evening. "All of us now are thinking of committing suicide."

In addition to that federal police team, about 200 pro-government soldiers still hold the southwestern gate of the refinery, according to the federal police officer and a western official briefed on the situation. The rest of the 36-square-kilometer compound appears to have fallen under the control of IS fighters.

"Over the last couple of days, things have been out of control at the Baiji refinery, and in the town of Baiji," which is just south of the refinery, said a senior Energy Police official. "The situation is very difficult and there are no clear plans about what to do."

He said that, as of Wednesday, 80 percent of the refinery was held by the IS group. A second senior Energy Police official said that pro-government forces had lost control of the whole interior of the compound and were only able to contest positions along the perimeter.

The Baiji refinery is Iraq's largest, with a nameplate capacity of 310,000 barrels per day (bpd). It has been offline since June 2014, when the IS group launched a massive offensive throughout northern Iraq.

IS fighters have penetrated the perimeter many times since then, but Iraqi soldiers and al-Hashid al-Shabi (Public Mobilization) militiamen have managed to repel their past attacks. In December 2014, pro-government forces made progress securing the broader area, but those gains have now been reversed.

On April 11, the IS group launched its most determined campaign yet to take the facility. Pro-government forces rebounded from a four-day offensive after reinforcements arrived, but IS fighters continued hit-and-run attacks along the perimeter; in the past two days, they have moved swiftly through the refinery complex.

Leaders of the Energy Police, Federal Police, Salahaddin Operations Command and the al-Hashid al-Shabi have been holding meetings to develop a strategy to respond to the latest IS surge into Baiji, but they have not been able to coordinate effectively, the two Energy Police officials said.

"The senior officers… have had so many meetings during the last few days, but with no result on the ground," the Energy Police official said.

Military leaders in Baghdad are either unaware of the dire setbacks in Baiji or have been unwilling to acknowledge them publicly.

"The Baiji refinery and most of its vital facilities are still under the control of the Iraqi security forces, except for some pockets of IS inside the refinery, who are under siege from Iraqi security forces," said Sabah Nouri, a spokesman for the counter-terrorism forces, speaking on Thursday.

Pro-government forces have struggled to repel the attacks of IS militants partly because they do not control the surrounding area. As a result, they have not had a consistent stream of supplies or ammunition, and reinforcements have been slow to arrive because they have to traverse hostile territory littered with roadside bombs.

The federal police officer trapped inside the refinery said his team had called for help numerous times, but that reinforcements could not reach their position.

"No one has offered us any help so far – no backup force or orders of any type to help us," the officer said. "I have a number of wounded, some of them in very serious condition. Shortly before you called me, one of my wounded soldiers… I gave him non-potable water, sewer water, because we do not have enough water left, and we need to ration it for this prolonged siege."

IS fighters have set tires and other material on fire, in addition to the refinery storage tanks already burning, which has created thick smoke that complicates Iraqi and U.S. efforts to conduct air strikes and helps prevent helicopters from delivering supplies or reinforcements.

An edited video posted online by the IS group on Wednesday shows IS militants shooting anti-aircraft weapons at bombers flying above. The date and authenticity of the footage could not immediately be verified, but it also appears to show IS fighters moving with relative freedom throughout the refinery, including crude processing infrastructure, storage areas, and office buildings.

The refinery has suffered significant damage, though the precise extent is unclear. A senior Oil Ministry official said that "four storage tanks and connecting pipes inside the refinery were destroyed by Daesh." The official added that there is little information in the ministry about the status of the refinery or the plans to retake it.

A senior official with Iraq's state-run North Oil Company (NOC) said the refinery had been damaged extensively in the past week's fighting.

"Thick black smoke is rising from tanks inside the refinery as a result of artillery and mortar shelling on parts of the refinery, specifically the fuel tanks," the NOC official said. "Iraqi forces are unable to put out the fires."

A senior Mosul-based member of the IS group told Iraq Oil Report that trucks of gasoline, loaded last week from storage tanks in the refinery, had recently arrived in Mosul and sold for 1,750 Iraqi dinars per liter. That is roughly double the price of gasoline in government-controlled areas of Iraq, indicating that fuel in IS-held territory has become very scarce – a likely impetus behind the group's intensified effort to take the Baiji refinery.

The IS member said the militants plan either to use the refinery by reconnecting pipelines leading from the refinery to storage tanks south of Mosul, or to destroy the refinery entirely.

Iraqi reporters in Baghdad and Mosul are anonymous for their security. Jamal Naji reported from Baghdad. Kamaran al-Najar reported from Kirkuk. Ben Lando and Ben Van Heuvelen contributed from the United States.