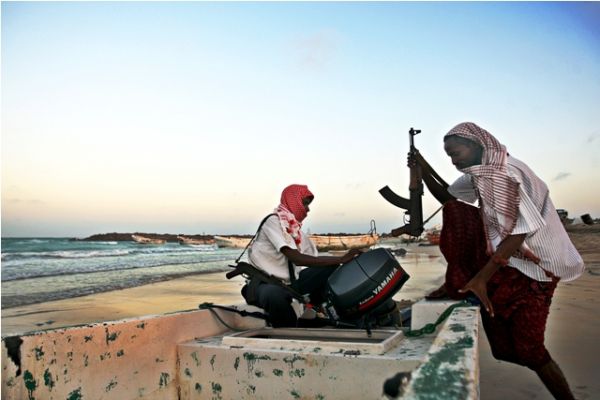 Armed Somali pirates carrying out preparations to a skiff in Hobyo, northeastern Somalia, Jan. 4, 2010, ahead of new attacks on ships sailing in the Gulf of Aden. On Aug. 8 pirates of unknown nationality robbed at least two vessels anchored in Iraqi waters. (MOHAMED DAHIR/AFP/Getty Images)
Ben Lando of Iraq Oil Report

At about 4am on Aug. 8, in the dark waters of the Gulf near Iraq’s primary oil-export terminal, a small pirate vessel accosted an American cargo ship. Two men wielding AK-47s boarded the Sagamore, held the crew at gunpoint, and robbed them of money, cell phones, and computers.

It was one of four nighttime pirate raids perpetrated that morning, between 2 a.m. and 4 a.m., in waters guarded by the U.S. Navy. According to the U.S. Navy's Fifth Fleet, based in Bahrain, the other ships targeted were the Arminia, sailing out of Antigua and Barbuda; the Crystal Wave, of North Korea; and the Sana Star, of Syria.