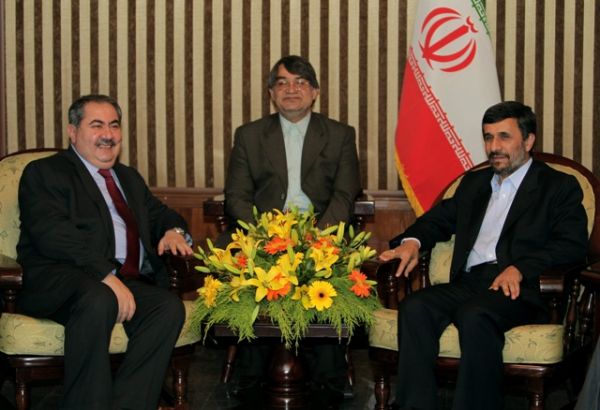 Iranian President Mahmoud Ahmadinejad (R) meets with Iraqi Foreign Minister Hoshyar Zebari (L) on the sidelines of the a two-day nuclear disarmament conference in Tehran on April 17, 2010. Iran slammed 'atomic criminal' the United States and called for its suspension from the UN nuclear body, urging changes at the UN Security Council and in the Non-proliferation Treaty. (BEHROUZ MEHRI/AFP/Getty Images)
Ben Van Heuvelen and Ben Lando of Iraq Oil Report

Iraq would likely violate U.S. sanctions if it follows through with a series of proposed oil and gas projects with Iran, or if it continues to export fuel and oil via tanker truck – some of which is alleged to be smuggled.

President Obama earlier this month signed a law upgrading sanctions against Iran in response to Iran's disputed nuclear program. Since the mid-1990s, U.S. policy has essentially presented companies with an ultimatum: if they choose to do business with Iran, then they risk losing access to American markets.