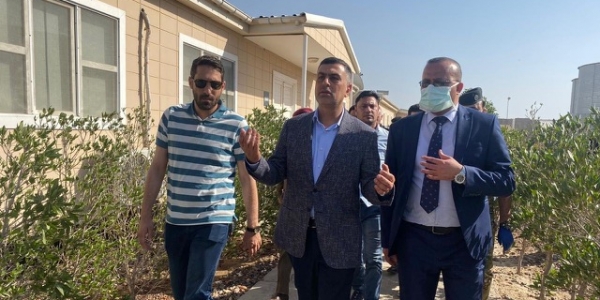 Officials in Iraq's oil and health sectors continue to isolate suspected cases of new coronavirus (COVID-19), hoping to slow the spread, but health professionals are warning that a mass outbreak is still a threat – and could overwhelm health services.

Foreign oil workers in the Kurdistan region were sequestered coming off a flight into Sulaimaniya on Thursday night when another passenger tested positive for COVID-19. In Basra, the governor banned non-residents from entering the province unless they can prove they are there for business, such as in the oil sector. That's on top of Oil Ministry measures to curtail work hours and change shift rotations to reduce opportunities for exposure.

"The closure of borders and the quarantine measures were crucial," he said in the interview. "The first cases all came from Iran. [Then] local transmission started, so we expect to see higher numbers now."

But doctors and health officials across the country said that Iraq's weak public health infrastructure is hampering its abilities to respond to the growing crisis. And a lack of test kits, essential medical supplies like masks and protective equipment for nurses, doctors, and patients, and quarantine sites increase the risk of the virus spreading.

On Wednesday, the WHO labeled COVID-19 a pandemic, and the next day Iraq's Health Minister Dr. Jaffar Sadiq Allawi said the ministry was working in cooperation with the WHO to control the spread of the disease, including imposing measures limiting freedom of movement, transportation and work in Iraq.

As of publication, the ministry said there were 93 confirmed cases and nine deaths.

Cases are set to rise and overwhelm Iraq's underdeveloped emergency outbreak response plans, which were due to be overhauled last year, said Ismail. Iraqi health officials are now trying to delay a wider COVID-19 outbreak in the hope that warmer temperatures may lessen the impact of the virus.

"Our current capacity to receive coronavirus patients, given the available isolated beds, is 400," said Dr. Mohammed Khoshnaw, spokesperson for the Kurdistan Regional Government's (KRG) health ministry. "If the coronavirus cases in the KRG hit 1,000 then we will face shortages and slip into crisis."

On top of the pandemic, Iraq is facing an economic crisis caused by a global slump in oil prices, and political uncertainty over who will succeed caretaker Prime Minister Adil Abd al-Mahdi. Political stasis means that the government, provisionally led Thamir Ghadhban, who serves as one of Iraq's two deputy prime ministers and the oil minister, may not have the authority to pass legislation needed to deal with the mushrooming crises.

A lack of central leadership has resulted in a series of differing governorate-led responses to the pandemic, and confusion for foreign and national business responding to rapidly changing rules. Adding to the crisis is Iraq's underfunded health system – eroded by U.N. sanctions in the 1990s, the fallout from the occupation following the U.S. invasion in 2003, and years of mismanagement since.

The WHO is providing Iraq with two negative pressure isolation rooms in Baghdad and Erbil, at a cost of $120,000, as well as personal protective equipment, training and technical support. The United States has sent at least 2,500 tests and has allocated funding for health response equipment.

"We see countries with advanced medical systems such as the UK, Italy and Germany are faced with crises. Our capacities and resources are limited. We will need international support if the cases increase," said Khoshnaw. "We are yet to receive any significant medical support. What we have received is a certain amount of face masks from the Chinese government."

Dr. Haider Hantosh, a senior official in the Dhi Qar province health department, said its health care system was lacking prior to COVID-19.

"So of course it is the same during the coronavirus crisis – we have many challenges," he said. "Currently, things are under control, but we can't guess what happens next," he added.

Dhi Qar heath department director Dr. Abdul-Hussein al-Jabiri said his team has established isolation centers and instructed citizens to avoid gatherings and wear masks. He also said Iraq's Ministry of Health has given more than $200,000 to his department for equipment and medical supplies, local al-Hashid al-Shabi (Popular Mobilization) forces donated a mobile hospital with five beds, and the state-run Dhi Qar Oil Company (DQOC) will send five caravans to be used by the Hussein Teaching Hospital in Nassiriya.

A medical official in a Basra hospital described the response of the authorities to the crisis as "primitive" because of the lack of quarantine facilities and test devices. The official said that the devices failed to give a proper diagnosis, and that they are waiting for another shipment of devices to arrive from Turkey.

On Wednesday, Basra Gov. Assad al-Edani ordered checkpoints into the province to "ban incoming citizens from other provinces to Basra province, except those who reside in the province or have official business in the government departments or oil companies with proof to back up the claim," he wrote in the order, which was provided to Iraq Oil Report. "Please consider and implement accordingly, and instruct the checkpoints at the entrances of the province to take what's necessary regarding this matter."

While hospitals scramble to cope, preventative measures taken by oil companies operating in Iraq to protect staff appear to have been effective so far.

On Tuesday, the state-run Basra Oil Company (BOC) announced further measures to prevent the COVID-19 outbreak hitting oil production. Staff hours will be reduced from 50 percent to 30 percent, with all but the most senior staff working one day on and two days off. Employees will also be prevented from travelling outside and inside Iraq.

Foreign and national workers at the Rumaila oil field in Basra have been separated as a precaution, a field worker said.

On Monday, Edani announced a site near North Rumaila had been selected as a quarantine center for suspected COVID-19 cases.

On Wednesday, the KRG's Council of Ministers halted travel for citizens between the Kurdistan region's provinces, as well as between the KRG and federal Iraq – except for those with special permission, those with diplomatic delegations, or members of medical teams.

On Thursday night, 20 workers for Russia's Gazprom Neft were quarantined when a passenger on a Qatar Airways flight from tested positive for COVID-19.

"A team of Garmian's Health Directorate visited Gazprom's operation site at Hasira, isolated the 20 Russian workers and put them under quarantine. They will not mix with the other workers," said a company official. "Their blood samples have been taken for test. They will be examined again in three days to see if they've contracted coronavirus."

There were 81 passengers on that flight, the worker said, and all passengers were ordered to present themselves for testing, Sabah Hawrami, head of the Sulaimaniya Health Directorate, said at a press conference.

There's a significant element of self-reporting required, said Abdullah Goran, the spokesperson of the province's health directorate, which makes containing the spread of COVID-19 more difficult.

"We have some shortcomings, of course. Many people have avoided quarantine centers after returning from Iran, and they caused big headache for our teams," he said. "Except for WHO, no international NGO and institute has helped us. Local NGOs helped during the awareness campaigns, but they are poor with very little resources."