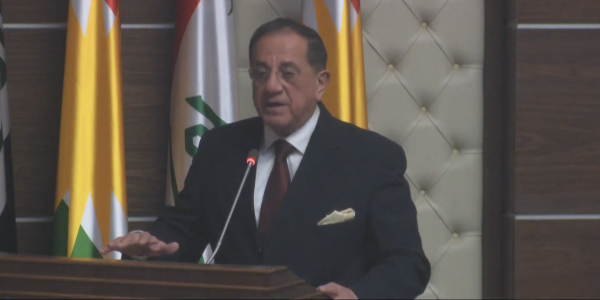 Kamal al-Atroshi is sworn in as minister of natural resources of the Kurdistan Regional Government of Iraq at the regions Parliament in Erbil on Jan. 6, 2021. (Source: parliament.krd)
Mohammed Hussein, Rawaz Tahir, and Ben Lando of Iraq Oil Report

Update: On Wednesday, three days after our original story published, Kamal al-Atroshi was confirmed by Kurdistan’s Parliament as minister of natural resources. Of 111 MPs, 81 voted yes.

Twenty MPs voted no – from known opposition parties such as Komal, Kurdistan Islamic Union, and New Generation, as well as from Gorran – and others abstained or didn’t attend, including some from the Patriotic Union of Kurdistan. They called for reform in the oil sector, including reviewing oil contracts and disclosing production, export, and revenue data.

ERBIL/SULAIMANIYA - Kamal al-Atroshi has been nominated to lead the semi-autonomous Kurdistan Regional Government's (KRG) oil sector, after more than a year in which the Ministry of Natural Resources (MNR) went without a permanent minister.

KRG Prime Minister Masrour Barzani, who has also been functioning as acting minister of natural resources since his government took power in July 2019, publicly announced Atroshi's nomination Sunday, and several KRG officials said a confirmation vote would take place in the regional Parliament as soon as Wednesday.