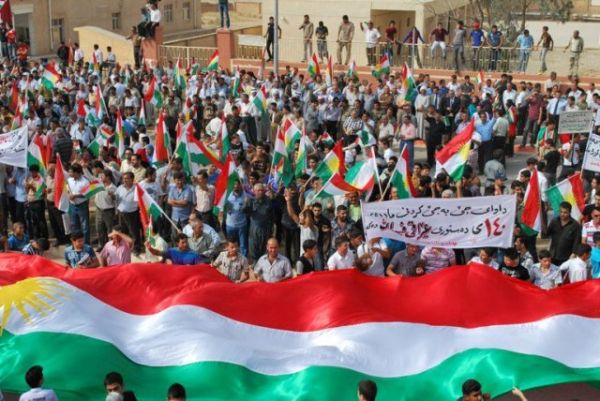 Iraqi Kurds protest in Khanaqin, in Diyala province, over a directive to replace all Kurdish flags flying at government buildings with those of the Iraqi state. (ADAM AL-ATBI/Iraq Oil Report)
Adam al-Atbi of Iraq Oil Report

KHANAQIN, IRAQ - An order by Prime Minister Nouri al-Maliki to ban the flag of the Kurdistan Regional Government (KRG) from government buildings here sparked protests and caused long-simmering ethnic disputes to boil over.

Khanaqin isn't officially under the authority of the KRG, but its majority-Kurdish population has been flying the KRG's flag instead of the government of Iraq's. The KRG controls a semi-autonomous northern region that has clashed with Baghdad over several issues, including territorial boundaries, oil development, and the proper balance of power between the central and regional government.