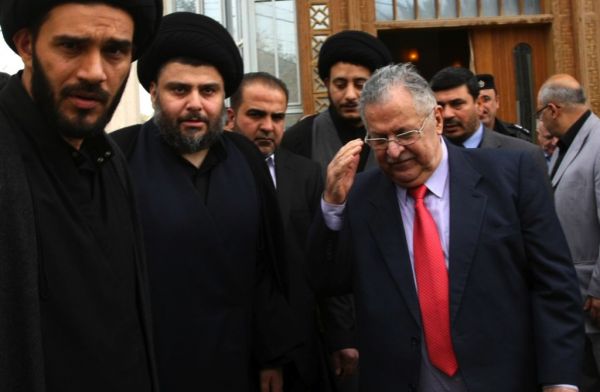 Following a meeting in Najaf, Iraq on Jan. 14, 2011, Iraqi President Jalal Talabani salutes as he is escorted by cleric Moqtada al-Sadr (second from left), whose populist political bloc is proposing direct redistribution of a portion of Iraq’s oil revenue to the poor. (QASSEM ZEIN/AFP/Getty Images)
Staff of Iraq Oil Report

BAGHDAD - Prime Minister Nouri al-Maliki's political coalition has agreed to implement a series of sweeping policies advocated by Moqtada al-Sadr, in a move that reveals the cleric's escalating political power and the fragility of the premier's governing alliance.

On Sept. 5 Sadr released a statement threatening to call for widespread protests unless the government could meet three lofty demands: to give Iraqis a share of oil revenues; to create 50,000 new jobs; and to provide free fuel for all electricity generators. On Wednesday evening, leaders of the National Alliance — a broad coalition of Shiite parties that forms the foundation of Maliki's support in Parliament — held an internal coalition meeting and voted to satisfy those demands.