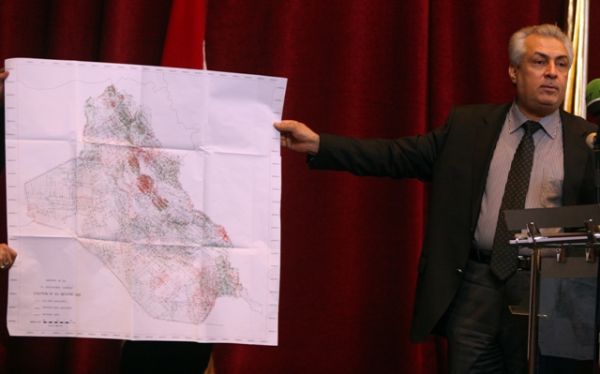 Iraqi Oil Minister Abdul Karim al-Luaibi speaks to the press in Baghdad on April 25, 2011, to announce that Iraq is to auction 12 gas and oil fields to foreign companies in January 2012, in the fourth such opening of its energy sector. (AHMAD AL-RUBAYE/AFP/Getty Images)
Ben Lando and Staff of Iraq Oil Report
Published Tuesday, April 26th, 2011

BAGHDAD - Iraq's Oil Ministry has pushed back to January a fourth bidding round which will offer up to foreign oil companies a dozen exploration blocks, believed to hold oil and gas whose discovery would drastically increase the reserves of the world's third-largest oil holder.

Top ministry officials said the licensing round will be pushed back from an earlier November date.