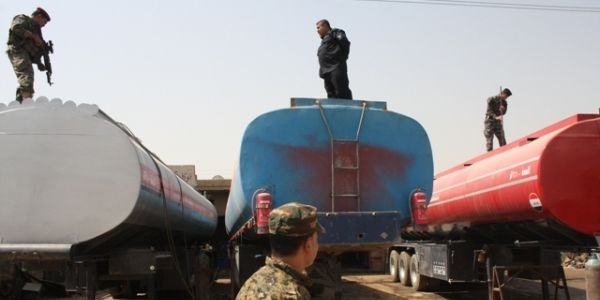 Tankers retroffited by a smugglers' operation to hide as much as half of their fuel load are discovered by the Iraqi Oil Police on Jan. 27, 2011. (BEN LANDO/Iraq Oil Report)
Ben Lando of Iraq Oil Report

BAGHDAD - Late last year, while a first-of-a-kind conference pushing oil sector transparency was meeting in the theater of the Oil Ministry headquarters, dozens of barely armored but heavily armed vehicles of the Iraqi Oil Police were outside in a dusty ministry parking lot, being prepared for a surprise raid on a group of bandits in Iraq's oil smuggling industry.

The chief of the Oil Police likes to show his guests videos in which his forces catch men filling up oil tankers in the middle of the desert, arrest them and, sometimes, set their trucks on fire, thereby sending a message to would-be smugglers. But their targets that day were not the usual suspects.