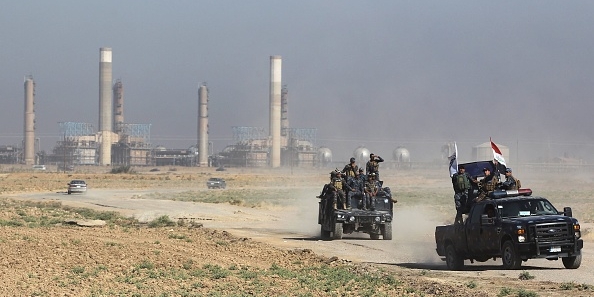 Iraqi forces drive past an oil production plant as they head towards the city of Kirkuk on October 16, 2017. (AHMAD AL-RUBAYE/AFP/Getty Images)
Staff of Iraq Oil Report

KIRKUK - Militants from the self-proclaimed Islamic State (IS) are reasserting control over several areas in northern Iraq, signaling a new phase in their intensifying insurgency and raising new threats against critical energy infrastructure.

Following dozens of IS attacks in the past month, security forces have withdrawn from many villages on the southern outskirts of Kirkuk city, according to multiple local residents and security officials. There are also larger pockets of territory, extending into Diyala province, where security forces patrol during the day but cannot venture at nighttime because of insurgent threats.