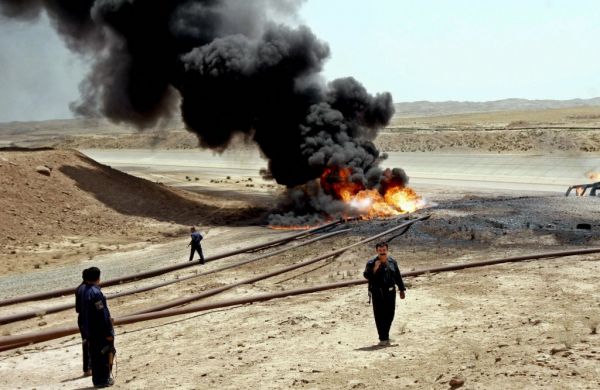 Members of the Oil Police secure a burning oil pipeline near Kirkuk on July 3, 2006. Iraq's northern export conduit has continued to suffer from both sabotage and smuggling. (MARWAN IBRAHIM/AFP/Getty Images)
STAFF of Iraq Oil Report

KIRKUK - Iraq's northern oil pipeline, the country's export conduit to the Turkish port of Ceyhan, has continued to suffer major blows at the hands of smugglers and saboteurs.

The police directorate in Kirkuk Province said repairs are under way after they discovered that smugglers had tapped a relatively unguarded portion of the pipeline just east of Kirkuk. Meanwhile, a bomb attack crippled a section of pipeline in Iraq’s northern province of Salahaddin earlier this week, and will take several more days to repair.