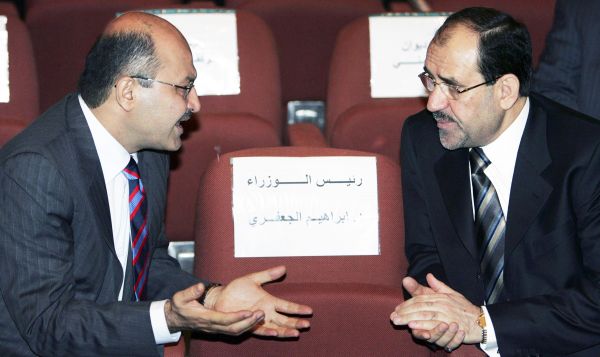 Barham Salih (left), who was then deputy prime minister of Iraq and is now the prime minister of the Kurdistan Regional Government, talks with Iraqi Prime Minister Nouri al-Maliki during a national assembly meeting May 20, 2006 in Baghdad. (CEERWAN AZIZ/Getty Images)
Staff of Iraq Oil Report

The Kurdish delegation was led by KRG Prime Minister Barham Salih, and included the top adviser to KRG President Massoud Barzani, among other KRG ministers. The meeting was also attended by Speaker of Parliament Usama Nujaifi and senior members of Iraq's major political blocs, including the two vice presidents.