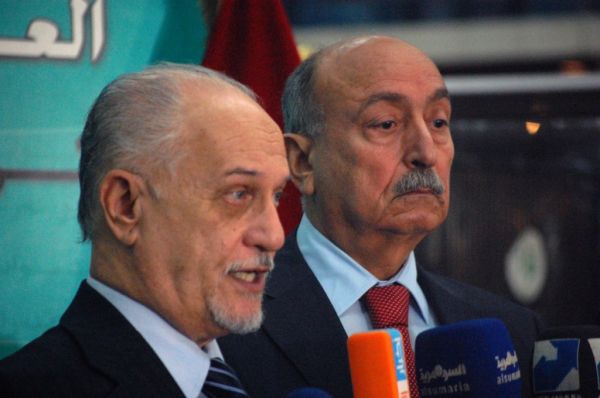 The chairman of Parliament's oil and energy committee, Adnan Janabi (R), joins the former oil minister and current deputy prime minister for energy, Hussain al-Shahristani, at a press conference in Baghdad. Janabi has intensified his criticism of the contracts signed by the Oil Ministry under Shahristani's leadership, and says the next contracting round should not happen until Parliament passes legislation to govern the oil sector. (BEN VAN HEUVELEN/Iraq Oil Report)
Staff of Iraq Oil Report

BAGHDAD - Iraq’s Ministry of Oil insists it will hold a fourth bidding round for international oil companies in January, despite growing opposition from Parliament’s oil and energy committee, whose chairman said the ministry's deals were "not fully covered legally."

When asked about the committee’s objections, an Oil Ministry spokesman said, “We don’t want to argue with many people about this issue. The ministry is going on with its plans.”