Without the legislation, Iraq would not have enough cash to pay public-sector employees. 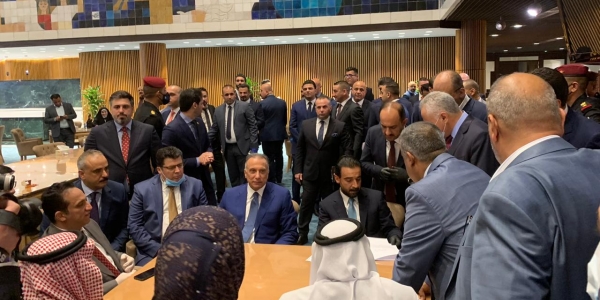 Then Prime Minister-designate Mustafa al-Kadhimi (center-left) meets with Parliament Speaker Mohammed al-Halbousi and others at Parliament ahead of the formal vote appointing him prime minister on May 6, 2020. (Photo credit: Farhad Alaaldin)
By Staff of Iraq Oil Report
Published Friday, June 26th, 2020

BAGHDAD - Iraq's Parliament has passed a law authorizing new borrowing of nearly $18 billion – an emergency measure that will enable the government to pay public-sector salaries despite a dire financial crisis.

"The loan law was passed by a majority vote," said Ahmed Haji Rashid, a member of the federal Parliament with the Komal party. "If the Parliament hadn't passed the law, it would be blamed for the consequences of no salaries being paid this month."