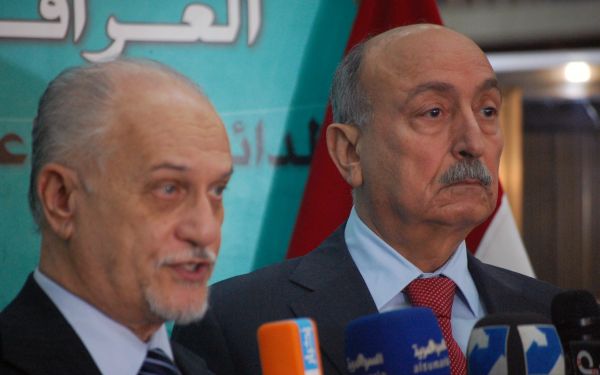 Adnan Janabi (R), the chairman of the Parliament's oil and energy committee, gives a press conference with Deputy Prime Minister for Energy Hussain al-Shahristani in February 2011. Janabi's committee voted on April 18, 2012 to set aside a draft oil law favored by Shahristani, and instead consider competing versions of that legislation. (BEN VAN HEUVELEN/Iraq Oil Report)
Ben Van Heuvelen and Staff of Iraq Oil Report

BAGHDAD - The Iraqi Parliament's oil and energy committee is resuming its efforts to push forward long-delayed oil legislation – and as a first step, it has voted to set aside a draft favored by Prime Minister Nouri al-Maliki.

On April 18 the committee voted on whether to move ahead with a draft oil law proposed by the Cabinet last summer, according to multiple committee members. By a vote of seven to six, with three abstentions, the committee decided to set that version aside.