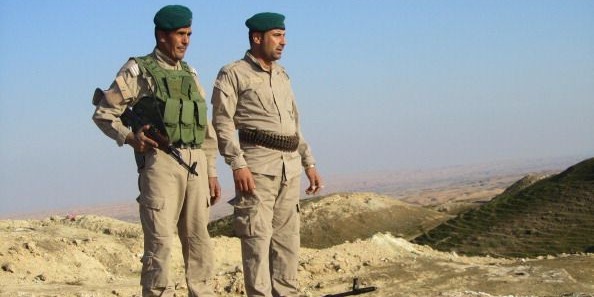 Kurdish Peshmerga hold a post in the mountains between the towns of Tuz Khurmatu and Khanaqin, on the border of the Diyala and Sulaimaniya provinces, on November 22, 2012. (MARWAN IBRAHIM/AFP/Getty Images)
Amir Ali, Mohammed Hussein, Rawaz Tahir and Lizzie Porter of Iraq Oil Report

KHANAQIN - Insurgents bombed a power transmission station in the Jalula area of Diyala province late Monday, depriving many residents of electricity — the latest in a string of incidents that highlight the unresolved security gaps in northern Iraq's disputed territories.

Two local officials blamed the attack on the self-proclaimed Islamic State (IS) militant group. After losing control of its Iraqi territory in 2017, the group evolved into a guerrilla-style insurgency, finding safe havens in areas where fractious Iraqi security forces have consistently failed to establish a deterrent presence.