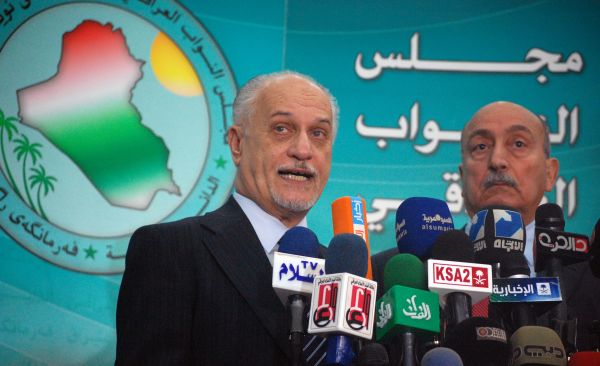 Hussain al-Shahristani (left), the deputy prime minister for energy and former oil minister, gives a press conference with Adnan al-Janabi, the chairman of the Parliament's oil and energy committee, in February 2011. The two men have spearheaded two competing versions of a law that would give definitive structure to Iraq's oil sector. (BEN VAN HEUVELEN/Iraq Oil Report)
Ben Lando and Staff of Iraq Oil Report

BAGHDAD - Two laws that would dramatically alter the contentious landscape of Iraq's oil sector – and potentially de-politicize its operations – will be taken up by two committees next week.

Parliament's Oil and Energy Committee is scheduled to debate a law to reconstitute the Iraqi National Oil Company (INOC), and the Cabinet's Energy Committee – led by Hussain al-Shahristani, the ex-oil minister, current deputy prime minister for energy affairs, and key ally of Prime Minister Nouri al-Maliki – will take up the oil and gas law.