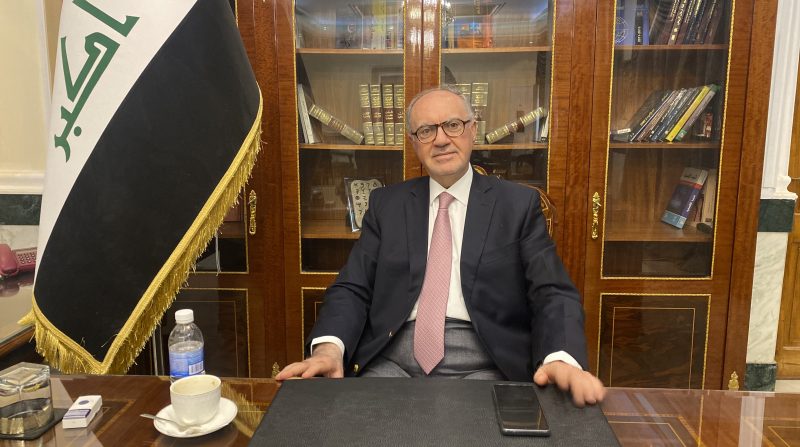 In an interview in Baghdad on June 9, Allawi discussed the ramifications of the court’s landmark February ruling that struck down key components of the Kurdistan region’s oil and gas sector.

Previous federal budgets included clauses that, in theory, allocated roughly 12 percent of government spending to the Kurdistan region, in return for Erbil sending Baghdad oil or equivalent oil revenue from its independently managed fields. In reality, that arrangement has never been fully implemented, and has been replaced by stop-gap agreements between Baghdad and Erbil.

Under the latest such deal, the Kurdistan Regional Government (KRG) was receiving semi-regular monthly transfers of 200 billion Iraqi dinars ($138 million), most recently in May. Those transfers will not continue, Allawi said.

Allawi has overseen Iraq’s public finances since May 2020, through a time of rollercoaster global crude prices that caused the oil-reliant country’s revenues to plummet and then rise dramatically since Russia’s invasion of Ukraine pushed oil prices to their highest level since 2008. A recent increase in foreign currency reserves to $70 billion dollars is largely due to higher global oil prices, but also because of prudent fiscal management and the devaluation of the Iraqi dinar against the U.S. dollar, Allawi said.

Depositors have also shown more confidence in Iraq’s banking system with private individuals and businesses choosing to keep their money in the country rather than other regional centers, where inflation and risks are higher.

Allawi expressed support for the emergency bill passed by parliament last week allocating 25 trillion dinars ($17 billion) to support the agriculture and energy sectors and cover payments of additional public sector workers. It also includes 4 trillion dinars ($2.7 billion) to cover debt repayments to Iran for gas and electricity imports, which would theoretically help mitigate the kind of supply disruptions that have previously caused electricity service to fail during the peak demand summer months.

The interview with Allawi took place three days before Muqtada al-Sadr ordered his MPs to resign from Parliament, casting even greater uncertainty on political negotiations to form a new government that have been deadlocked for eight months. In the meantime, Iraq's caretaker government has limited powers and no ability to pass a new budget.

A full transcript of the interview is available to Iraq Oil Report subscribers below.