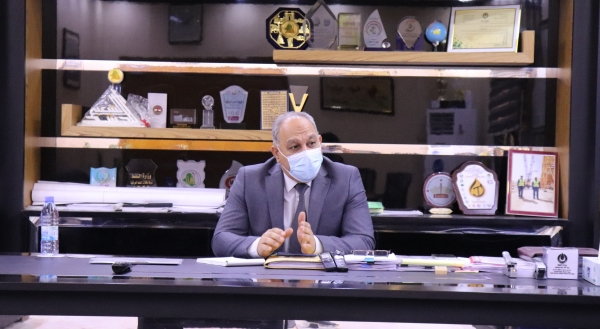 KHOR AL-ZUBAIR - The director of Iraq's state-run South Gas Company (SGC) says his goal is to process all of the associated gas that is generated as a byproduct of crude production at Basra oil fields, much of which is currently burned in a wasteful practice known as flaring.

Iraq's flagship initiative to end flaring is the Basra Gas Company (BGC), a joint venture between the SGC (51 percent), Royal Dutch Shell (44 percent), and Mitsubishi (5 percent), which is responsible for processing associated gas from the Rumaila, West Qurna 1, and Zubair oil fields.

The biggest potential for new progress in gas capture, however, is the Ratawi gas hub. The French firm TotalEnergies (formerly Total) is in advanced negotiations to develop the hub as part of a multi-faceted Heads of Agreement signed in April.

Under the current plans, the hub would eventually process 600 million standard cubic feet per day (scf/d) of associated gas from five southern oil fields — Majnoon, West Qurna 2, Luhais, Suba, and Ratawi — with the possible addition of the Bin Omar field, which has a high gas-to-oil ratio.

In an interview with Iraq Oil Report, SGC Director General Hamza Abdul-Baqi Nassir said BGC hopes to award the design and engineering contract for the first phase to the American firm KBR in July.

The project is crucial to Iraq’s plans to secure enough dry gas for power generation and wean itself off Iranian gas imports, which have been severely interrupted in the past week. This has led to an acute energy crisis with power cuts across federal territory sparking protests as temperatures have risen.

Part of the problem is that Iraq lacks sufficient capacity to utilize all the associated gas produced from its oil fields, leaving power plants without sufficient feedstock to generate electricity.

“We are working on a plan to reach zero flaring and we will need investors and new facilities because we do not have the finances to build them and the cost will be high," Nassir said. "More investment is going into the gas sector than in oil, but the state is unable to release funds for strategic projects. So we have two choices: either we continue to flare gas, which is a waste of money and causes serious environmental harm, or we invite foreign companies to build the infrastructure and share in profits according to percentages to be agreed by both parties. That is the only solution."

EDITOR'S NOTE: The following interview was conducted shortly before an agreement was finalized with the International Finance Corporation and a banking consortium on June 29 for a loan of $360 million to BGC to help increase its processing capacity and end flaring.