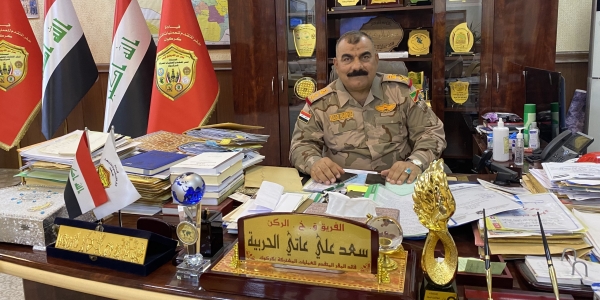 KIRKUK - Kirkuk's strategic importance in Iraq comes from both its huge oil reserves and the composition of its population, which consists of several different ethno-sectarian identity groups.

In the past, insurgents and militant groups have sought to exploit territorial disputes, unresolved historical grievances, and mistrust by perpetrating violence and reducing confidence in the ability of the state to provide security and resolve problems through a fair political process.

After the war against the self-proclaimed Islamic State (IS) militant group, which once controlled much of Kirkuk province, the overwhelming priority for Iraqi forces has been to consolidate their victory by establishing security and rooting out IS militants who have receded into rural areas to prosecute a guerilla-style insurgency.

Those efforts have been challenging for several reasons: insurgents have been able to hide in rugged terrain; some locals in remote areas have been intimidated or coerced into collaboration or silence; and security forces have not had the manpower or the coordination required to establish a deterrent presence in territories where unresolved political disputes have left contested boundaries of control.

In recent years, insurgents have exploited those gaps not only to evade capture but also to launch attacks, including on oil facilities. Kirkuk-area fields are currently responsible for more than 250,000 barrels per day (bpd) of Iraqi production, including about 100,000 bpd of exports sold via pipeline to Turkey's Ceyhan port.

As the head of the Kirkuk Joint Operations Command (JOC), Lt. Gen. Saad Ali Aati al-Harbiya oversaw security in the province until last week, when he was transferred to the Joint Operations Command in Baghdad. Days prior, he spoke with Iraq Oil Report in Kirkuk about the ongoing efforts of Iraqi security forces to fight insurgents, improve coordination among rival security services, and win the trust of locals.