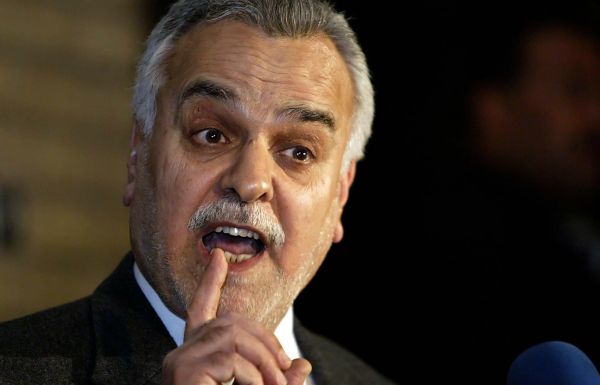 ISTANBUL - If the biggest obstacle to foreign investment in Iraq has been violence, then security gains in Anbar province should herald a much-needed economic revival, said Tariq al-Hashimi, one of Iraq's vice presidents.

With U.S. troops preparing to withdraw fully by the end of the year, Hashimi cast economic development as a key security priority: Iraq cannot fight terrorism without fighting poverty and injustice.

To that end, Hashemi expressed concern that Anbar has not received backlogged state funds, which were allocated to the province in previous years but were returned to Baghdad when security problems stymied local capacity and investment.

Since 2006, the Baghdad native has served as one of the country's vice presidents, a highly politicized post in the presidency system divided by sect.

Hashemi spoke with Iraq Oil Report on the sidelines of the second annual al-Anbar International Investment Conference, which is organized by the national and provincial investment commissions.

Ben Lando: Anbar is the biggest Iraqi province with a lot of prospects, but it seems that in the recent past the central government hasn't necessarily paid enough attention to investment and reconstruction in Anbar. Why is this?

Tariq al-Hashimi: I think the main challenge in the past was security. So even the money that has been allocated within the federal budget – many provinces, because of security, they were unable to make use of the allocated budget.

This is the problem. So the balance of the money that has not been spent has revolved back to the federal budget. We're not getting that back. These provinces now are asking the federal government to repay all that pending money which has not been used by those provinces.

We do have a criteria on basis on which the money is allocated and distributed among all the provinces: the number of population of each province. This is the criteria. This is why we are paying 17 percent of the budget to Kurdistan. This subject is being resolved.

The situation is much better than it was in the past and the provinces are getting what it's entitled to.

BL: In terms of security, now that a decision has been made and there won't be a U.S. military presence in Iraq, what is that going to do to security and to the state?

TH: From the beginning, regardless of all that American troops have done to shoulder part of the security burden and responsibilities, many attacks took place on the Americans on the ground in Iraq. So it is not a safety valve – that when the American army is in Iraq there will be no attacks from terrorism and security is better. I think the actual facts on the ground are proved that even when they are on the ground and even when their troops are as many as 140,000 like during 2008 and 2009, the attacks are ongoing.

We have to not only to improve the quality of our armed forces, to restructure the armed forces, to make it national orientation and professional activation. This is the target that we should aim for.

In addition to that we should go ahead on a package of reforms to tackle economy, to tackle politics, to tackle social. We shouldn't concentrate on the armed forces and security devices as we've done so far. That's needed but in addition to that we have also to tackle other things. We have unemployment – the youngsters who are unemployed, they are a source of terrorism. If they are getting jobs, security will get better. So we have to tackle the economy and offer more jobs to our youngsters. This is just part of the solution.

BL: So, focus on economy and basic services as a security priority.

TH: To make the style of life even better than it currently is or used to be. It could just be a reform or a way to stabilize the situation and to encourage the people for the future. Unfortunately, in the past, the concentration and focus went on the armed forces. Whenever there is an attack the government immediately tried to tackle or address the violence problem through upgrading the capacity, the number of troops, and security devices. This should be part of the solution. But other things are still needed.

BL: What should be the priorities of the security forces if you are looking at focusing them better?

TH: We have to restructure. Many of our officers in the army and in the security belong to MoD and MoI, many of them are not graduated from the military academy and are getting high ranks. They are not graduated normally. And they don't have enough expertise. Most of them are even thinking sectarian ways. So we have a problem for that.

When I say reshuffle we should try to keep in the armed forces those who are being graduated regardless of Shia or Sunni or Kurdish or Christian. Iraqi, the Iraqi national (interest), should be the criteria, and not the root of that individual.

BL: That happens across every institution in Iraq right now.

There must be a balance. According to the constitution all the Iraqis are equal in terms of responsibilities and rights. Others are also entitled to be in this ministry or that ministry. But now, for the time being, especially in the high ranks, the first or second tier, it's closed to one sect, in many ministries. This should be changed.

BL: In terms of reducing sectarian tensions throughout the country, how do you go about doing that? Even though the situation has improved, a lot of the people in the western and northern provinces have complained that they are not seeing the benefits of investment that other provinces have, like in the south.

TH: This is true to some extent. Regardless of what you said – which I agree with, as far as the human rights is concerned – but when you talk about poverty, the poverty in the southern provinces is much worse than the poverty in Anbar, or Salahaddin. There is unfortunately no justice so far, and if we are talking human rights we do have a problem when we talk about transparency, about the corruption, and depriving the poor people from their rights, their share in the oil and gas – this is part of the injustice. I can't say that one province is better than another province. All provinces are suffering, although in different ways.

BL: About the issue of poverty – not just in Iraq but every country where there is an increase in poverty, especially young people, they tend to become more radical. How do you address this?

The source of terrorism, the source of violence, is injustice. If you take a boy, 16 or 17 years old and he's a suspect, you don't have proof he committed an illegal practice, you arrest this boy and leave him in custody for years and don't present him to a court, what sort of citizen are you creating? A citizen full of anger and he is hating everything. If given an opportunity, he's going to destroy everything. You are creating terrorism. Directly.

This policy is in fact damaging strategy and policy for society. Many times I've tried to warn the cabinet, the prime minister, the judicial system: be careful about that, you are destroying the society, you are destroying the personality of the Iraqi nationality. And corruption, depriving those people who are entitled to their share. How long should people tolerate this policy?

BL: Does that mean that Anbar province will go toward the Kurdistan model then?

TH: No, I don't think this should be the recipe for that. The recipe is to make major change and reform to the central government. If you do that, you will safeguard Anbar as well as other provinces.