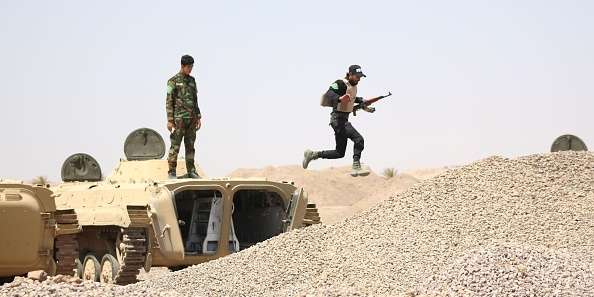 A fighter from the Popular Mobilization units run to take position on the front line during a military operation against the Islamic State (IS) group jihadists on the road leading to Saqlawiya, north of Fallujah, in Iraq's Anbar province on Aug. 19, 2015. (HAIDAR MOHAMMED ALI/AFP/Getty Images)
Jamal Naji and Ben Van Heuvelen of Iraq Oil Report

Pro-government security forces have launched a multi-pronged attack to retake Ramadi, tightening the military blockade around the city and setting the stage for a deeper assault.

Iraqi leaders have been talking of an imminent operation to liberate Ramadi ever since it fell to the Islamic State (IS) militant group five months ago, without significant results. But for more than a month, the military dynamic has been shifting: Shia militias have been ordered to withdraw from the area, the Iraqi government has brought more Sunni tribal fighters into the al-Hashid al-Shabi (Popular Mobilization) program, and the U.S. military has provided extensive help in the form of weapons, training, planning, and air support.

In the ensuing operation, which began early Tuesday morning, pro-government forces backed by U.S. air power have attacked IS-held positions leading to all of the city's entry points - north, east, and west. They have been able to clear and hold territory, and IS supply lines into the city appear to be cut.

"Spirits are high," said Mohammed Jassim, one fighter from the Albu Fahad tribe now operating under the al-Hashid al-Shabi program. "The strikes of the international coalition are serious, targeting all the Daesh convoys. This has forced Daesh to abandon its posts and retreat to inside the city of Ramadi, where their graves will be."

Capt. Mousa Ismail, an officer with the 7th Iraqi Army Division involved in the Ramadi assault, said advancing soldiers had been able to hold territory largely due to the effectiveness of engineering units, which were defusing the improvised explosive devices (IEDs) left by retreating IS fighters. In the past, such booby traps have typically caused heavy casualties and prevented pro-government forces from advancing and securing territory swiftly.

"Now there is an intention to set up a quick plan to enter the city of Ramadi," Ismail said.

Ramadi is the capital of Iraq's largest province, Anbar, which was first formally invaded by the IS group 22 months ago, when it took advantage of the minority Sunni community's boiling anger at the Shia-led government's collective marginalization. This followed more than a year of the IS group taking and holding safe havens in far flung operating zones in the province.

Although the recent gains around the city have provided reasons for optimism, pro-government forces have not yet crossed bridges and passed other key choke points still controlled by IS militants, who seem likely to fight more tenaciously than IS fighters in the surrounding areas who had an avenue of retreat to the city center.

The recent operation has seen pro-government forces regain territory they have not held since May. That progress appears to bear the imprint of significant U.S. military planning, featuring coordinated action by a number of different forces operating out of multiple bases.

From the north, dozens of air strikes by the U.S.-led coalition have paved the way for the 7th Brigade of the Iraqi Army, which includes an engineering team that dismantled over 100 IEDs, according to an officer in the Anbar Operations Command, which coordinates security in the province.

Those forces have now controlled the Zangora area, northwest of the city, and are in the process of defusing IEDs in the Albu Faraj area, according to Ismail. Albu Faraj connects to a bridge that is the only major northern entry point to the city.

From the west, the Iraqi Army's 7th Division and soldiers from a special forces group known as the Golden Division advanced on IS positions. As of Friday, they have captured the ceramics factory and a traffic police station on the western edge of Ramadi, essential for securing the major western road into the city.

"This location is considered the western gate of Ramadi," Ismail said. "This has had a great impact on the soldiers' morale."

From the east, Sunni tribal fighters have been battling alongside the 16th Brigade of the Iraqi Army and a force from the Federal Police, according to the Anbar Operations Command officer and Jassim, one of the tribal fighters. They chased IS militants from several areas just east of Ramadi, including previous strongholds like Souffiya.

Jassim said U.S.-led coalition forces launched artillery from the Habbaniya base, about 15 kilometers east of Ramadi, which helped soften IS positions east of the city, while coalition air strikes hit IS fighters scrambling to retreat and reinforce against the northern prong of the Iraqi assault.

The coordination and momentum of the ongoing offensive stands in contrast to the seemingly haphazard and ultimately ineffective counter-attacks launched over the summer, in the aftermath of Ramadi's fall.

Flush from their gains in Tikrit, thousands of Shia militiamen operating under the al-Hashid al-Shabi program - which had already been fighting around Fallujah - flooded farther into Anbar, and Iraqi leaders and military commanders began issuing confident predictions of victory.

But the influx of Shia militias also raised the risk of aggravating sectarian tensions and alienating Sunni tribal fighters aligned with the government.

The forces were also in disarray. Not only had the Iraqi military and, when abandoned, then allied Sunni tribal fighters just retreated from Ramadi, but the militias themselves - many of them deeply connected to Iran - answered to disparate chains of command. The U.S. military was also hampered in its capacity to coordinate among the different forces because it could not cooperate directly with the Iran-backed militias.

After a summer of relative stalemate, the Shia militias began to withdraw from Ramadi in August. (They are still fighting around Fallujah.) The impetus for their withdrawal was never announced, but several security officials speculated there was a secret agreement struck between the Iraqi and U.S. governments and Shia militia leaders.

"The Khataib Hezbollah, Asaib ahl al-Haq, and Saraya al-Salam militias withdrew from the battlefield [around Ramadi], leaving the federal police units in their place," said Capt. Mahmood al-Khilfawi, a police officer now stationed at the Habbaniya Air Base, just east of Ramadi, who was interviewed in early September. "The explanation is that the American forces intend to carry out a big military operation with the Iraqi military, police, SWAT, Golden Division, and the sons of the tribes of Anbar."

At the same time, Anbar saw an influx of U.S. weaponry, including artillery, helicopters and armored vehicles, according to several security officials stationed at the Habbaniya and Ain al-Assad bases.

"U.S. forces are in Ain al-Assad in large numbers and have taken over more runways and hangars, which their engineers are building into massive training facilities," said an officer with the Iraqi Army's 7th Brigade, stationed at Ain al-Assad, speaking in mid-September. "Large planes are transporting U.S. military equipment back and forth to Habbaniya air base."

"What I have seen over the past few days was unbelievable," said a local police officer stationed at Habbaniya, also speaking in mid-September. "A great number of American armored vehicles and Abrams tanks arrived inside the base, as well as Apache helicopters. And a large force participated in reconnaissance with deployments west of Fallujah and east of Ramadi."

The al-Hashid al-Shabi program is essentially a vehicle for channeling government funding and weapons to paramilitary groups to fill the gap created when an already hollow security force imploded as the IS group launched and sustained its invasion. To date, most of the beneficiaries have been militias tied to Shia groups and political parties, but now some Sunni tribal fighters are being brought into the fold.

Several security officials said the Iraqi government has decided that 10,000 Sunni tribal fighters should be armed and paid through the al-Hashid al-Shabi program, and many of these fighters have been trained by American forces at the Ain al-Assad and Habbaniya air bases in Anbar.

"U.S. troops are welcomed, and the change in Anbar is a must," said Ahmed Kitan, a sheikh of the Albu Ghanim tribe, which has been fighting the IS group. "We are now fed up with the government, the al-Hashid al-Shabi, and even our local tribesmen's promises to rid us of Daesh; therefore, we demand the presence of the Americans, who are well armed and can supply the necessary air cover. Sunnis will not find a better opportunity than this to unite in order to expel Daesh."

Sheikh Kamil Mekhlef Fahdawi, a leader of the government-aligned Albu Fahad tribe, said 8,500 fighters had already been trained - by both American and Iraqi forces - and were now incorporated in the al-Hashid al-Shabi framework. Another tribal fighter, Raad Faris al-Kaoud, of the Albu Nimr tribe, said 3,000 fighters had been trained and armed at Ain al-Assad base alone.

Tribal fighters say they have received thousands of machine guns and rifles, as well as ammunition and other supplies.

Pressure mounts on IS militants

Even if the build-up of forces around Ramadi does not lead to a quick victory, it does appear to be choking off the flow of basic goods and other supplies and putting pressure on the IS group.

One resident of Ramadi, reached by telephone, said fuel is no longer available to civilians and is reserved for IS fighters. The IS group runs generators that provide about four hours of electricity per day, compared with about 10 hours of daily power service before the IS group took over.

In Fallujah, which is also surrounded by pro-government forces, residents reached by telephone said food has grown scarce and prices have skyrocketed. Cucumbers and tomatoes now cost 5,000 Iraqi dinars per kilogram, while kerosene and cooking gas are all but unavailable.

Another resident of Ramadi said Tuesday that the IS group had recently staged a public execution of 15 of its own soldiers, accusing them of leaking information to pro-government forces.