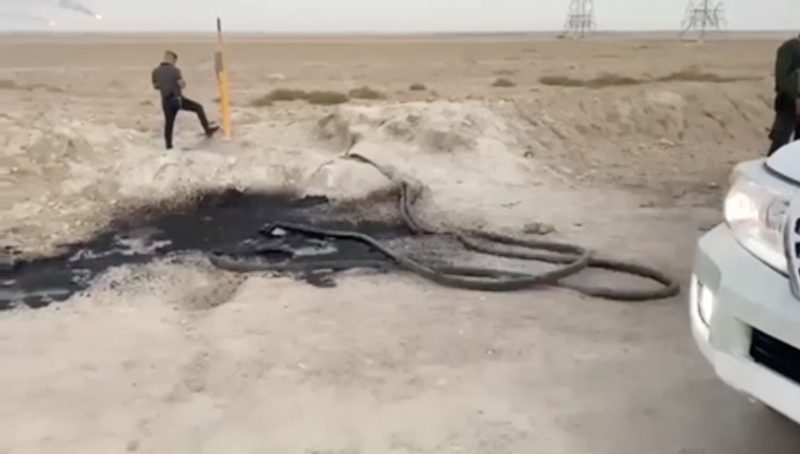 A screenshot from a video showing security forces investigating the site of an oil smuggling operation on the Halfaya-Fao pipeline, near the Zubair oil field, in Basra in October 2022.
Staff of Iraq Oil Report

BASRA - A large oil smuggling operation in southern Iraq has unraveled into a scandal involving murder and political intrigue, prompting a leadership shakeup in the country's Oil Police amidst allegations that security forces were conspiring in the theft.

The smuggling ring appears to have been stealing thousands of barrels per day from a crude pipeline in Basra and trucking at least some of the oil to a grey-market crude and fuel trading depot in the Kurdistan region, according to an Iraq Oil Report investigation based on interviews with more than a dozen security officials and traders.

Several top officials responsible for guarding Iraq's energy infrastructure have been arrested or otherwise implicated in the smuggling ring, including the national head of the Energy Police, Maj. Gen. Ghanem al-Husseini, who has been replaced by Maj. Gen. Ali Halil al-Mayahi, according to multiple security officials.

"We ordered the takedown of oil smuggling networks and the implementation of arrest warrants against the gangs that dared to steal the rights of Iraqis," said Prime Minister Mohammed Shia al-Sudani in a statement posted to Twitter on Nov. 2. "By Allah's assistance, the National Security Service in cooperation with other security formations managed to break the biggest oil smuggling network in Basra."

It is far from clear, however, who was involved in the smuggling ring, whether the true ringleaders have been arrested, and whether the government has the will or capacity to uncover the powerful political factions and militias that may have enabled and profited from the theft.

Among the many security officials interviewed by Iraq Oil Report throughout southern Iraq and in Baghdad, two broad and conflicting narratives have emerged.