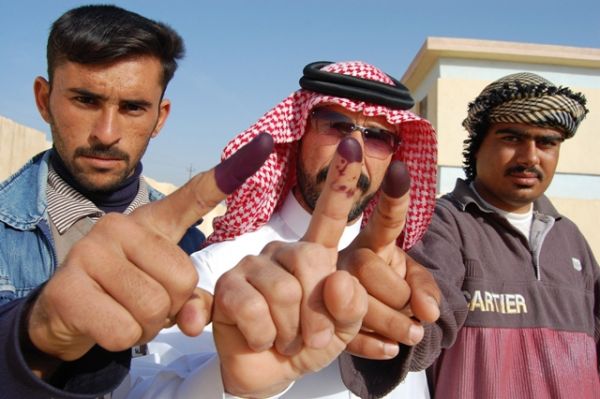 Iraqi men show their ink-stained fingers after casting their votes in the Sunni bastion of Fallujah in the Anbar province on March 7, 2010. (AZHAR SHALLAL/AFP/Getty Images)
Ben Lando of Iraq Oil Report

BAGHDAD - As the formation of a new Iraqi government draws closer, Iraq's Sunni population is bracing for political marginalization. Once dependable advocates of a strong central government, they are increasingly supporting the rights of provinces to control their local economies, including the oil sector.

Prime Minister Nouri al-Maliki, leader of the Shiite-dominated State of Law coalition, seems poised to secure a second term. It's not clear yet whether the Iraqiya political block, which is led by former Prime Minister Ayad Allawi and has a major Sunni component, will have a meaningful role in the new government. If it doesn't, Iraqiya would become an opposition party or boycott the government altogether.