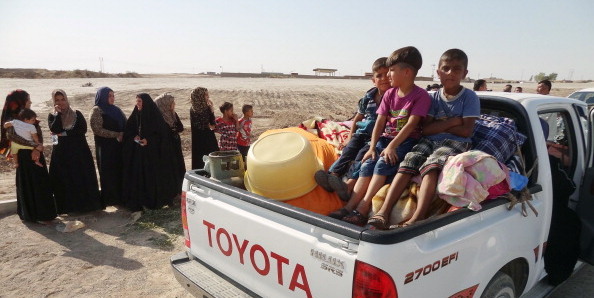 Displaced Iraqis from the village of Mansuriya, Diyala province, where fighting with militant jihadists has been raging, gather on the side of a road as they are heading to the ethnically mixed northern Iraqi city of Kirkuk where they want to take refuge, on June 27, 2014. (MARWAN IBRAHIM/AFP/Getty Images)
Amir Ali, Araz Mohammed, Mohammed Hussein, Lizzie Porter, and Rawaz Tahir of Iraq Oil Report

Hundreds of families have fled their Muqdadiya district villages in Diyala province after an attack apparently perpetrated by the so called Islamic State (IS) group spurred lethal reciprocal violence.

Multiple Iraqi security and political officials told Iraq Oil Report that on Oct. 26, IS militants armed with semi-automatic rifles killed 11 people in and around the predominantly Shia village of Rashad. Additional civilians were killed and wounded in retaliatory attacks in Sunni majority Nahir Imam village nearby.